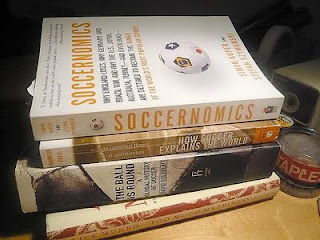 A new enthusiasm bites you and you race out and buy some books about it. Nothing like a new interest for over-loading on new purchases. They say that’s why golf is the perfect hobby. There’s no end to the books and magazines about it. To an avid reader, an impractical book buyer, a new pursuit gives you a determined reason to go to a new shelf in the store.

Lately, and at first sheepishly, I find myself looking at books about soccer. (Why do I, right now, want to say, I know, like Craig Ferguson says it?), I say sheepishly (rolling my eyes and grinning, again like Ferguson) because my friends don’t (worse, won’t) do soccer. So, I’m alone among my pals when it comes to subjects like the World Cup and MLS and the Tottenham Spurs. They don’t even want to hear me wonder aloud why the British press says Chelsea were beaten, or Liverpool have lost three straight. It’s like cricket to them. It can’t be, but that’s how they act about it. (They’ll watch UConn and Tennessee girls’ basketball. But not Premier League soccer. Huh?)

So they didn’t run out and buy The Beckham Experiment like I did. I read it before I’d even seen him play. Then last month I watched him two weeks in a row. He was way better than I’d been led to believe, and easily the most interesting player on the field (best too maybe, even at his age).

Then there’s Soccernomics, a Freakonomics about British soccer. A fun way to learn inside stuff about the game. A better way, and a better-written way though, is How Soccer Explains the World. If Thomas Friedman were young and interesting, this is what he might write.

I read these two books over Thanksgiving, north of Boston. The friend I stayed with had no TV, so I walked two blocks to an Irish bar to watch the Notre Dame game and a couple of other football games. Among the college football-filled screens was, surprisingly, one with a British soccer game.
Posted by Bill Gunlocke, a city reader at 8:59 PM