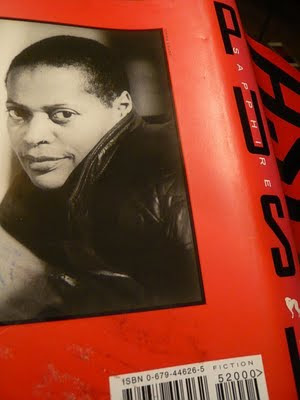 I saw the movie first. Both got me bothered again about what needs to be done in school.


I don’t use Netflix like you’re supposed to. I don’t have a box or whatever it’s called that you can play DVDs on. So I can’t watch them on the television set in the other room. For a while I was watching them on my laptop. I’d put it right in my lap and watch it like I was reading a magazine. I liked that. But then the tray on my computer stopped working , so all I can catch now on my lap are the ‘instantly watchable’ offerings. That’s where I found ‘Precious’ a few days ago.

I was certainly aware of it since before it came out in the theaters. One of my daughters had read Push, the book it’s based on, and raved about it. Everybody raved about it. And it seemed to everybody I knew that it would be a book and a movie I’d rush to. But you know how that can go. Sometimes you resist the obvious. Sometimes you just have to wait till the time is right.

Well, it was right the other day. I stared at the movie unblinkingly, as they say. When it was over, I went out and got Push. And read it. Here’s what it made me think about:

Good as the movie was, and as faithful to the book as a movie can be, the book was way better. The book is in the first person. You’re not just looking at Precious and thinking all sorts of things about her looks and her acting and how she might feel about being cast as an ugly fat girl (a typical distancing kind of discussion with yourself that keeps movies from being as close to the bone as a book), you’re seeing her and her world through her eyes. You’re hearing what she thinks about being fat and ugly. You're hearing her tell what it feels like to be raped by her father. It’s all complicated and heinous in a way that’s harsher and more revealing than the movie action. And the book is amazingly written in the illiterate, slowly improving, way that Precious wrote and spoke then. It’s a real reading experience, unenhanced by mood-altering music, unencumbered by pronouncements to yourself that this better win an Oscar.

It made me think, of course, about reading, in the Harlem where it takes place. The TV is always going in the apartment she shares with her mother. In the book, she calls her mother’s shows, her ‘stories’. That’s what they’re called in those apartments. Stories. Not book stories like we think of them. No, the soap operas are called stories. You’ve probably seen the movie. The mother, by law, had to have gone to school till she was 16. It doesn’t seem it, does it? You could put her up on the blackboard the first day of a teacher training class and spend the whole semester discussing her. Maybe they should do that in education courses in college; maybe they should dissect Precious’s mother for weeks, and see if they can come up with a way of re-tooling the curriculum in urban public schools that would allow (make sure) that students who spend 10 or 12 years in the system come out with the most essential tool required to live an engaged life in society; the ability to read well. Look what the lack of that ability did to her life, and to her daughter’s life. It was only when Precious began to learn her ABCs, at 16, in an alternative school, that her life began to be her life.

I’d recommend you read Push. I see that Sapphire, who wrote Push, has a book coming out this summer, called The Kid. It’s about Precious’s son, who we only know of as a little baby, fathered by Precious’s father. It’s rough stuff. Poverty and few jobs and racism can breed such normlessness. That’s nothing new. But it’s not going to get any better unless the city, and other cities, determine to do the one thing that for sure will improve it all, and the one thing that the law gives them some control over for at least 10 years, and that’s to teach every kid they have in school to read well enough to live a decent life.

Let’s not get all Woody Guthrie about teachers unions and class size and who should be fired first if staffs are trimmed. If we made a commitment to teach reading above all else until it sunk in, no excuses allowed, sociological or psychological, things would take care of themselves. It has to sink in. Whatever it takes. Exposure to books and magazines that the kids find interesting must be part of every day, every class actually. Time for the kids to swim around in that material is a must.

Let’s use swimming for a minute. It works as a metaphor for all this. Indulge me.

Urban kids can’t swim as well, generally speaking, as suburban kids. They don’t have as many nice summer public pools or health club pools or summer cottages or trips to the shore. Or parents who can swim. Just like reading where the city kids don’t have as many bookstores or nice libraries or shelves at home stocked with books. Or parents who can read as well as suburban parents. Again, I’m speaking generally.

So, let’s say in gym class one semester, swimming is on the agenda in a NYC public school. I don’t even know if any city schools have pools. But let’s imagine it. Because that’s all I’m doing; imagining it. But I’ll bet the first classes are as disorderly and disheartening for all involved as an early reading class might be. Kids would be hesitant, kids would be loud, kids would screw around. Some would find it wonderfully refreshing. Others would mask their insecurity and fear over not knowing how, by being dismissive of it, calling it dumb. Refusing to even try. You can imagine it. You can also relate. We’ve all reacted to some new challenge that way.

The only thing that will make it better is for those kids to go in the pool a lot. They’re way behind the suburban kids. Will they ever catch up? Maybe. If they get a chance to get in the pool a lot. Everyday if necessary. It can’t be done without a lot of ‘reps’. But with those reps, it can be done.

The schools have the kids in class for at least 10 years. That’s more than enough time for enough reps in reading. They have to make sure the kids get those reps. That’s all that’s certain to work. In anything really. Cooking. Dancing. Swimming. Crossword puzzles. There is no substitute for reps.

A personal rep experience. I started being drawn to British soccer on television last year. I’m a passionate sport fan. But like most guys my age, I didn’t know much about soccer beyond Pele' and a few other names. Because we don’t know much about it, we dismiss it as some cricket-like thing that less robust countries play. I was the lone guy among my friends who decided to investigate it. At first I didn’t know the rules, how the standings were kept, what various tournaments were, who was good and who wasn’t. But there were visuals about it, and the wonderful crowd-chanting, that kept me coming back to watch a little bit of it every week. And what do you know, the more time I spent with it, the more reps I got, the more I started to figure it out. My friends who don’t watch hardly any of it, still dismiss it. They never got the reps. So they just don’t know. Sound familiar?

It sounds too familiar, if you ask me.

Posted by Bill Gunlocke, a city reader at 7:40 AM