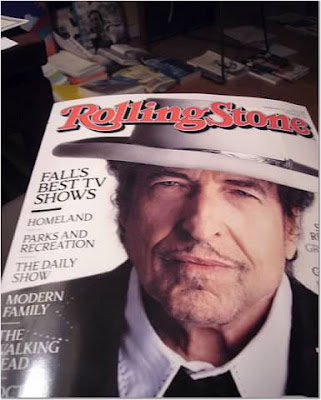 Get the new Rolling Stone

Along with the Four Tops and the Beach Boys albums and the other must-have records of those days in the early ‘60s, when I was tucked away in a Catholic boarding school, I had the first two albums of Bob Dylan. His voice was an acquired taste back then. I was not on the cutting edge of music. There were guys at school with more sophisticated albums than I had. But I was a folkie, and having those Dylan records was important to me. I would stare at the cover of The Freewheelin’ Bob Dylan with its snowy Greenwich Village street and dream of a possible free-thinking life down the road.

I bought the new Rolling Stone the other day to read the interview with Dylan. I’ve read it twice. I think he’s the greatest artist America’s ever had. So, of course, I’d recommend you get the magazine.

Posted by Bill Gunlocke, a city reader at 6:36 PM