From The New York Times. It's about HBO's 'Fahrenheit 451' coming next month. It's
written by the director. I read the book when I was in college. It wasn't assigned. I read it because I was hooked on Ray Bradbury. It worried me then. Still does. It's maybe why I don't watch much TV  and never had a big screen. 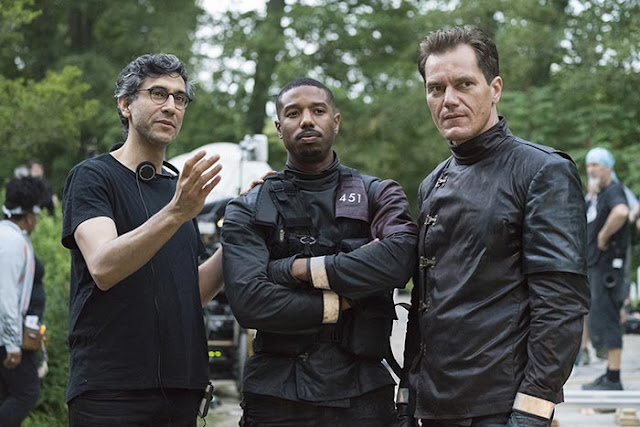 Why ‘Fahrenheit 451’ Is the Book for Our Social Media Age

No books were harmed in the making of this motion picture. There will be no such disclaimer at the end of my new film, because we burned a lot of books. We designed powerful, kerosene-spitting flamethrowers and torched books — en masse. This was not easy for me to do. I was taught at a very young age to read and respect books. Even setting a teacup on a book was considered a sin. In my parents’ household, Hafez’s book of Persian poetry, “The Divan,” was revered like a religious text.

But now I was making a film adaptation of Ray Bradbury’s seminal novel, “Fahrenheit 451,” which presents a future America where books are outlawed and firemen burn them. The protagonist, a fireman named Guy Montag, begins to doubt his actions and turns against his mentor, Captain Beatty. When I set out to adapt the novel early in 2016, I was faced with a big question: Do people still care about physical books?
I asked an 82-year-old friend for advice. “Go ahead and burn books,” he said. “They mean nothing to me. I can read anything on my tablet, from the ‘Epic of Gilgamesh’ to Jo Nesbo, and I can read them in bed, on a plane or next to the ocean, because it’s all in the cloud, safe from your firemen’s torches.”

If he felt this way, what would teenagers think? Bradbury’s novel is a classic taught in high schools across America. But the more I thought about it, the more relevant the novel seemed. For Bradbury, books were repositories of knowledge and ideas. He feared a future in which those things would be endangered, and now that future was here: The internet and new social-media platforms — and their potential threat to serious thought — would be at the heart of my adaptation.
ADVERTISEMENT
I had never adapted a book, let alone one so important. Altering a work so brilliant and beloved always upsets some fans. I knew Bradbury had supported François Truffaut’s 1966 film adaptation. More important, Bradbury himself had reimagined “Fahrenheit 451,” first as a stage play and then as a musical, changing many elements, including letting Montag’s neighbor Clarisse McClellan live. (In the novel, she dies early on.) With Bradbury as my guide, and a vow to stay true to his ideas, I began working on the script.

“Fahrenheit 451” was written in the early 1950s, not long after Nazis burned books and, eventually, human beings. America was living under a cloud of fear created by the House Un-American Activities Committee and McCarthyism, which brought political repression, blacklists and censorship of literature and art. These anxieties permeate the novel.

But Bradbury’s key inspiration was the invasion of seven-inch black-and-white televisions into people’s homes. Bradbury was no Luddite. He wrote screenplays, including one for an adaptation of “Moby-Dick.” He also wrote 65 episodes of a television series, “The Ray Bradbury Theater.” But in “Fahrenheit 451” Bradbury was warning us about the threat of mass media to reading, about the bombardment of digital sensations that could substitute for critical thinking.

In the novel, he imagined a world where people are entertained day and night by staring at giant wall screens in their homes. They interact with their “friends” through these screens, listening to them via “Seashells” — Bradbury’s version of Apple’s wireless AirPods — inserted in their ears. In this world, people would be crammed “full of noncombustible data” — words to popular songs, the names of state capitals, the amount of “corn Iowa grew last year.” They will “feel they’re thinking,” Bradbury wrote, “and they’ll be happy, because facts of that sort don’t change.”

Bradbury was worried about the advent of Reader’s Digest. Today we have Wikipedia and tweets. He worried that people would read only headlines. Today it seems that half the words online have been replaced with emojis. The more we erode language, the more we erode complex thought and the easier we are to control.

Bradbury feared memory loss. Today we have designated Google and our social-media accounts as the guardians of our memories, emotions, dreams and facts. As tech companies consolidate power, imagine how easy it could be to rewrite Benjamin Franklin’s Wiki entry to match what the firemen in Bradbury’s novel learn about the history of the fire department: “Established, 1790, to burn English-influenced books in the Colonies. First Fireman: Benjamin Franklin.” In his way, Bradbury predicted the rise of “alternative facts” and an era of “post-truth.”

As the virtual world becomes more dominant, owning books becomes an act of rebellion. When a printed book is in your possession, no one can track, alter or hack it. The characters in my film have never seen a book. When they first encounter a library, the books are like water in a vast digital desert. Seeing, touching and smelling a book is as alien to the firemen as milking a cow by hand would be for most of us. The firemen are transfixed by the books — but they still have to burn them.

Burning books in the film posed a legal challenge. The cover art of most books is protected by copyright, and in most cases we were unable to obtain permission to display it — let alone burn it on camera. So the art directors for my film designed countless original book covers that we could burn.

The question was: Which books? There were always more I wanted to burn than we had time to film. I knew I wanted to include some of my favorites, like “Crime and Punishment,” “Song of Solomon” and the works of Franz Kafka. But we had to burn more than just fiction. Herodotus’ “Histories” — history itself — was incinerated. Pages of Emily Dickinson, Tagore and Ferdowsi’s poetry crumbled into black ash. Hegel, Plato and Grace Lee Boggs’s philosophy were set on fire. The firemen discriminate against no one: Texts in Chinese, Hindi, Persian and Spanish all burned. A Mozart score, an Edvard Munch painting, magazines, newspapers, photographs of Sitting Bull, Frederick Douglass and the 1969 moon landing went up in smoke.

Even the most fanatic firemen would have a hard time burning all the copies of a best seller like “The 7 Habits of Highly Effective People.” After J. K. Rowling spoke out against Donald Trump on Twitter, people tweeted that they were planning to burn their Harry Potter books. So we followed suit. Famously banned books had to go: “The Autobiography of Malcolm X,” “Lolita,” “Leaves of Grass” and “The Communist Manifesto.” While we were shooting the film, “To Kill a Mockingbird,” a frequent target of censorship, was once again banned in some schools, so into the flames it went. For some authors, having a book burned in the film was a badge of honor. Werner Herzog and Hamid Dabashi generously donated their work to be burned alongside the best and the worst of literature. If we save “Wise Blood” then we must preserve “Mein Kampf” as well.

Watching the books burn was an otherworldly experience. The hiss of incinerating pages sounded like the final gasps of hundreds of dying souls. The more we burned, the more hypnotic it became — a mesmerizing spectacle of pages curling and embers dancing into the void.

Bradbury believed that we wanted the world to become this way. That we asked for the firemen to burn books. That we wanted entertainment to replace reading and thinking. That we voted for political and economic systems to keep us happy rather than thoughtfully informed. He would say that we chose to give up our privacy and freedom to tech companies. That we decided to entrust our cultural heritage and knowledge to digital archives. The greatest army of firemen will be irrelevant in the digital world. They will be as powerless as spitting babies next to whoever controls a consolidated internet.

How could they stop one person, hiding in his parents’ basement with a laptop, from hacking into thousands of years of humanity’s collective history, literature and culture, and then rewriting all of it … or just hitting delete?
And who would notice?

Ramin Bahrani is a writer, director and Guggenheim fellowship recipient whose films include “Chop Shop” and “99 Homes.” His adaptation of “Fahrenheit 451” will air on HBO on May 19.

Posted by Bill Gunlocke, a city reader at 8:46 AM