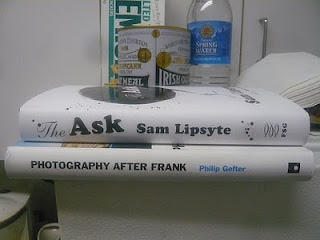 Here’s Kerouac from his introduction in 1959 to Robert Frank’s The Americans: ‘What a poem this is…Whether ‘tis milk of humankind-ness, of human-kindness, Shakespeare meant, makes no difference when you look at these pictures. Better than a show.’ The book changed photography forever. In Photography After Frank, a book of essays, mostly from the Times, by Philip Gefter, the altered landscape is surveyed. Avedon, Freidlander, Eggleston, Arbus, Goldin, and the rest. I just read it for the third time. It’s thrilling in its style, as are the vivid photo examples of what’s come since.

Here’s a funnyfunny book. A very smart book, a novel that I’m too old to be reading, by most measures. It’s about early careers and new marriage and new kids. The reviews I read were so excited about it though, I couldn’t resist. I’m only a few chapters into it, but I’ve already read some of them out loud to a friend. I laughed so hard I had put it down a few times to catch my breath, wipe my eyes. It’s The Ask by Sam Lipsyte. I’m tellin’ ya.
Posted by Bill Gunlocke, a city reader at 7:51 PM