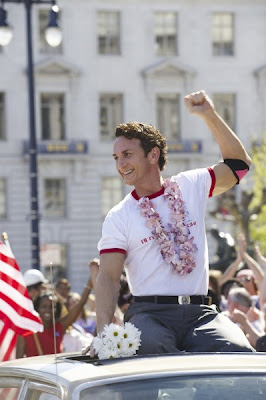 I NEED TO BE SEAN PENN

Here’s an image that came to me this morning, when I was without one, to get this started: When you read about major leaguers who come from the Dominican Republic, they invariably, in their poverty, first played with a baseball made of socks and rubber bands. Something like that. It’s so out of our realm, I can’t even accurately recall what fragments of stuff went into the balls. You almost don’t believe it. A ball? They couldn’t find even a rubber ball somewhere? Couldn’t steal a hardball somewhere? We’ve got so many balls, we can’t imagine it. You read the same thing about Latin American soccer players. No real soccer balls as kids. Paper bags and twine instead. Again, can’t be true, we half-think. Who, we wonder, not in Africa, can be that poor? Hell, we spend three bucks and more here on a little ice cream cone. A pint of Guinness is now seven.

But it is true. And that may be what it’s like for some of the city’s poorest kids where books are concerned. Maybe you’re thinking, oh no, you’ve seen some segment on local news where grateful black kids are given books by a corporate Santa or a Target store in some feel good clip, just before they go to the national news, just before the weather man makes a joke to the female anchor who’s tamping down an upright stack of papers and smiling like he’s funny. We all feel good in our New York City then, knowing that our poor kids are being looked after, that they have nice new books, and that everybody’s smiling. Did you see the faces on those kids! No problems. I’ll take another Guinness. With tip, eight bucks.

But that’s bullshit. The world is not what they tell you it’s like at 6:29. Look at the earlier segment where they showed some Brooklyn neighborhood where somebody’s been shot, where there’s been a big fire from an ashtray or an overloaded outlet or where the landlord is not fixing the busted water pipes. Look at those faces on the women out on the sidewalk, with the long-cigarette packs and the pink lighters in their hands and slippers on their feet and there’s the yellow police tape in front of their apartment building. Those kids in there don’t have books. There’s no Barnes and Noble up the street. And what do you make your own books out of? Twine and old T shirts and rubber bands? Do you think those mothers on the sidewalk in front of those buildings with cop cars red lights swirling, with firemen breaking through the walls, read to their kids? Goodnight Moon. Goodnight who?

This Bloombergian city that pats itself on the back so often you’d think it would need a chiropractor on the premises full-time must like to watch the 6:29 sign-off part of the news better than the earlier part. How else explain why it can’t get its will together to teach the kids to read even when they have them in school for 12 years . It’s staggering that the schools don’t determine to make up for the burnt-out, book-less beginnings that so many kids start out life in. Come on. Of course it’s going to take special effort. It’s going to take thinking outside the box, outside the syllabus. It can’t go on like it’s gone on. You’ve seen the test scores. They can’t suck enough, as Imus would say. No matter the spin the mayor’s Chancellor puts on them. Unless they’re 100%, they are signs of failure. As Bill Parcells always says about a team’s record: You are what your record says you are.

So here we are in the city that has so much. It’s dynamic. No doubt. I was in Dublin a couple years ago and took scores of photos of store fronts and pubs-with-Guinness and great-looking civic buildings and parks, and people. When I got back here, I told somebody, after being wowed again by this place I’d moved to, that I could have taken as many of those great Dublin-type pictures on one block right here; there’s that much good stuff here. We’re lucky to live where we do. But we’ve got kids in this same city who in the game of reading are playing with balls made of rags.

That’s why Sean Penn comes into this. The other night at 10:00 I turned my TV on just to see what might be on Anderson Cooper who I think is great whenever I catch him. He had Sean Penn on about Haiti where Penn had been for six straight months. He was now back in California, for good or just for a while, I don’t know. But he came right through the TV screen; he was so defiantly strong and unsmilingly fearless in what he said about scenes he‘d seen or things he’d come to know while he worked to provide shelter and water and food in Haiti. Was it 100% objectively true like Margaret Warner might tell it on Jim Lehrer? Who knows. But it was his truth, told unsparingly. No soft soap. He’ll blow his cigarette smoke right in your face. He makes a newsletter like this seem feckless. He makes a blog like mine seem wimpy. com.

If it’s going to take more from Bloomberg and Klein, according to me, and I say it every issue, then it’s going to take more from me and my ‘cityReader’, too. I don’t know what that’ll be, but it’s got to go toward the Sean Penn way. It can’t just be talk. It can’t be like watching high-minded TV shows. It can’t be NPR listening. It has to be more. Something where you roll your sleeves up like Sean Penn did in Haiti.

How’s this for not rolling your sleeves up like Sean Penn did: I joined Facebook last week. Here’s why though. I ‘d been told by well-meaning folks, you need to put your project on Facebook. So I finally did. But here’s really why I did, in a kind of a Sean Penn-seeking way. I sometimes have C-Span book shows on in the background on weekends while I’m reading the paper or magazines, or sneaking a cigarette. A couple weeks ago there was a guy on who wrote a book about Facebook. He said there was a young man in Colombia, who late one night posted (I’m not even sure yet if that’s what it’s called) to his 100 friends a note about how frustrated he was, continually hearing in the media about FARC, a radical group down there. When he woke up, he had like 1500 comments already. Some weeks later 1,000,000 people marched on Bogota as a result of his late night quiet rant. Man, I thought, what if I could do that about kids and reading in New York. And so that’s why I’m on Facebook. Hoping to spread the word. Knowing that I really want to be more Sean Penn about it though.

The only thing I’ve done ‘radical’ about any of this is to get 1000 stickers that say ‘acityReader’ on them with the blog’s address. You’re not supposed to put them up, even in the East Village, and a few have already been scraped off lampposts by the department of whoever does such things, so I’ve still got most of the 1000 in my apartment. But I mean to put them all up.

caption: SEAN PENN PLAYING AN ACTIVIST. He’s one in his real life, too. His six months in Haiti were more than a cameo.
Posted by Bill Gunlocke, a city reader at 6:59 PM No comments: 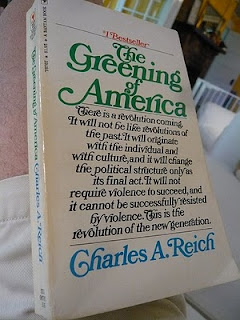 I was telling a friend a couple weeks ago that there are some books that gave words to what I was feeling at different times in my life. The Greening of America was certainly one of those. And not just for me; it spoke to the whole generation in 1970. I even saw my conservative father reading the excerpts from it in the evening paper.

I tried to get a copy last week. Out of print. Ouch. I was shocked. It was like Slaughterhouse-Five. I found a good used copy online. Even the quality paperbacks were pocket-size then. You actually carried them in your hip pocket. Vonnegut, Heller, Pirsig. To hold it now is to recall that time. I haven’t read it again. I’ve dipped into it. It’s a little intense. There was a war going on.

caption: EVOKING AN ERA. Looking at the cover art now, it’s as iconic as a T shirt.
Posted by Bill Gunlocke, a city reader at 6:48 PM No comments: 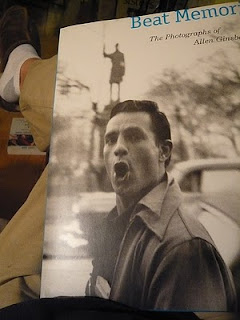 Beat Memories collects his photographs of his closest friends.

I’m going to Washington next week to see The National Gallery of Art’s show of 80 photographs that Allen Ginsberg took, mostly from 1953-1963, of Kerouac and Cassady and Corso and Burroughs and others who made up the Beats. I’ve looked at most of these photos more than a hundred times in an earlier book, snapshot poetics. I can’t recommend the book enough. It’s in paperback. You should own it.

This new one, Beat Memories is all that and more. It’s put out to accompany the exhibition. There are all the photos I’ve stared at before, and then some. Additionally, there’s an enlightening essay by Sarah Greenough. There’s also an interview with Ginsberg from 1991. You should own this book, too. The exhibit lasts through September 6. You could go. Take the Bolt Bus.

caption: ‘THE POIGNANCY OF A PHOTOGRAPH comes from looking back at a fleeting moment in a floating world’—Allen Ginsberg
Posted by Bill Gunlocke, a city reader at 6:42 PM No comments: 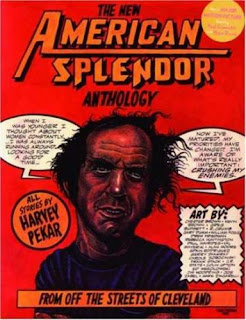 Harvey Pekar wrote a few things, music and book reviews, for a weekly paper,
The Edition, I ran in Cleveland in the 80s and 90s. He was wonderfully,
bewilderingly challenging. R.I.P.
Posted by Bill Gunlocke, a city reader at 6:33 PM No comments: