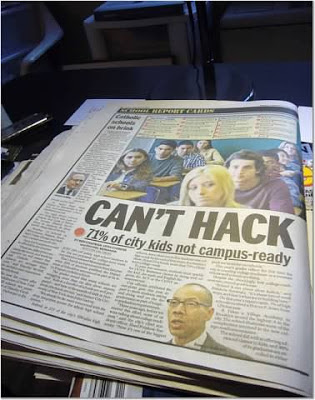 More depressing numbers about how we’re failing in our duty to our kids.

Some mornings I buy a Daily News, along with the Times which I get every day and can’t imagine why everybody doesn’t. Tuesday’s News had a two-page spread with a strong headline that said: CAN’T HACK COLLEGE. There was a large stock photo of high school kids in class. It was a bogus photo. They looked more like suburban kids than New York kids. Under the big headline it read: 71% of city kids not campus-ready.

You’re not shocked to read that. Are you? You should be, of course. But you just know by now that that’s the way it is here. You’ve seen such numbers before. It’s like reading again about cars running red lights here. As if you didn’t know. It’s an outrage you’re somehow supposed to accept.

I’ve seen so many articles like this over the years, here and when I lived in Cleveland. Seen so many bad numbers about city kids, that I’d be shocked if I read something different. That’s crazy that we’ve come to expect such failure. If your kids are in the system, you must be concerned, and angry. I’m concerned, and angry too. That’s why I hold my sign. That less than 30% of the city’s high school graduates are ready for the next grade is a cynical reality you’re supposed to accept here. But how can you accept that?

Are they saying that city kids can’t learn? Is that what they’re really saying? Year after year. Without really saying it? Are they saying they’ve tried everything, and nothing they’ve tried can make it better? What else could they be telling us in 2012 when it’s a given that college is more important than ever? Are we supposed to accept it that 71% of the city’s kids aren’t being prepared well enough in 12 years for the next grade? That means they couldn’t really do their high school work.

The city’s kids, of course, must not know how to read well enough. You’ve seen the depressing numbers about reading too. They’re just as bad. How could they not be? Those are the real numbers the school officials need to concern themselves with. It’s why the students are not college-ready. Too many are not even 8th grade-ready. Yes, we all know that there are sociological, and therefore psychological, reasons why reading is not easy for so many of the kids. We’ve known that at least as long as I’ve been reading about it, which is a long time. When are they going to get at that? When are they going to re-fashion the curriculum to focus on reading above everything else? It’s the key to all of it. Without the ability to read well, school is a waste of time. Why waste the kids’ time that way? Why not teach every school kid to read well?

There’s a resistance here to doing that, to focusing on reading above everything else. The ‘system’ doesn’t want to do that. Even New York-style do-gooders resist accepting that as the only real solution. I wonder why. I think about that a lot. The only reason I’ve come up with to explain their resistance is that for them to admit that the reading scores are that bad and to say we have to basically start from scratch for many of these kids, your kids, is something they don’t want to say. Any more than the Mets owner wants to say that the Mets have to essentially start over.

But, like the Mets, the numbers don’t lie. 71% failure. That sounds like something you think you’d read about happening in Borat’s muddy village. Not in New York City. 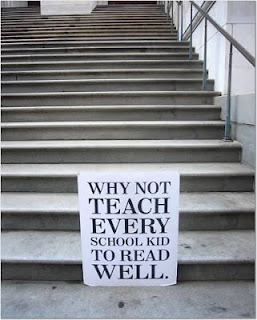 I say, they have to admit their failure. I say, they can’t go on like they’ve been going on. That would be a start. These kids have to learn to read. There’s nothing more important for the schools to do. They have to get English majors to teach these kids. They have to recruit top-rate English majors from good colleges. In this economy especially, such graduates could be convinced to do it. They’ve all probably thought about teaching. They might love to do it in New York City. It might even be a dream job, if the curriculum were re-tooled to honor reading, above everything.

I get mad thinking about the bad numbers. Last night I was re-reading the first few pages of Saul Bellow’s Herzog. I’ve read those pages countless times over forty years. I go to them when I feel like I’m crazy for worrying so much about things, crazy maybe for holding my sign. Here’s the first page:


If I am out of my mind, it’s all right with me, thought Moses Herzog.

Some people thought he was cracked and for a time he himself had doubted that he was all there. But now, though he still behaved oddly, he felt confident, cheerful, clairvoyant, and strong. He had fallen under a spell and was writing letters to everyone under the sun. He was so stirred by these letters that from the end of June he moved from place to place with a valise full of papers. He carried this valise from New York to Martha’s Vineyard, but returned from the Vineyard immediately; two days later he flew to Chicago, and from Chicago he went to a village in western Massachusetts. Hidden in the country, he wrote endlessly, fanatically, to the newspapers, to people in public life, to friends and relatives and at last to the dead, his own obscure dead, and finally the famous dead.

It was the peak of summer in the Berkshires. Herzog was alone in the big old house. Normally particular about food, he now ate Silvercup bread from the paper package, beans from the can, and American cheese. Now and then he picked raspberries in the overgrown garden, lifting up the thorny canes with absent-minded caution. As for sleep, he slept on a mattress without sheets—it was his abandoned marriage bed—or in the hammock covered by his coat. Tall bearded grass and locust and maple seedlings surrounded him in the yard. When he opened his eyes in the night, the stars were near like spiritual bodies. Fires, of course; gases—minerals, heat, atoms, but eloquent at five in the morning to a man lying in a hammock, wrapped in his overcoat.

Email ThisBlogThis!Share to TwitterShare to FacebookShare to Pinterest
That Was Some Year 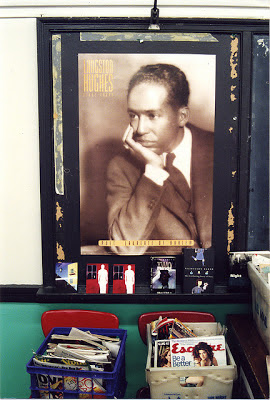 Out of necessity came a quick fix

The year I taught here a dozen years ago, I sucked at discipline. It was a Catholic high school for mostly poor boys from all over town. I was between editing jobs and I said yeah I’ll do it when the head of the English department asked me to take over for a guy who couldn’t control the class. This was October.

I loved the kids. They loved me. I knew as much about basketball as they did. But they still took advantage of me. They’d sleep, screw around. I have no instincts for discipline. They knew.

I tried to get their attention by finding good stuff for them to read. Most of them needed to learn to read a lot better than they did. I brought in stacks of paperbacks and magazines and loaded mail bins with them. It was the classroom I’d have wanted when I was their age. It worked, I think. Sometimes.

Posted by Bill Gunlocke, a city reader at 6:59 AM No comments:

Email ThisBlogThis!Share to TwitterShare to FacebookShare to Pinterest
A Room Of One’s Own

An independent bookstore is 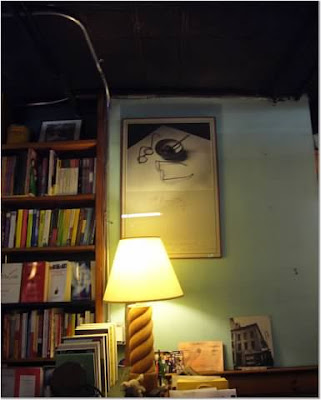 a place you should have in your life

I’ve said to someone that the reason I moved to New York was that you could walk to Irish bars and independent bookstores. It’s true. I’m not just saying that for affect. I didn’t move here for the people. I always knew where to find people.

The bookstore in the photo is Three Lives in the West Village. I go there mostly. It’s important to have a bookstore where you’re a regular. Why Amazon? You don’t really need that. You could go to a store and get the book, or order it there. They’ll call you when it’s in or email you. That’s a connection. Like going to your local to have a pint.

Go to your local bookstore for gifts this year.

Posted by Bill Gunlocke, a city reader at 6:53 AM No comments: 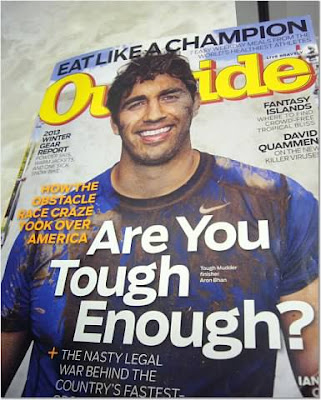 Posted by Bill Gunlocke, a city reader at 6:47 AM No comments: