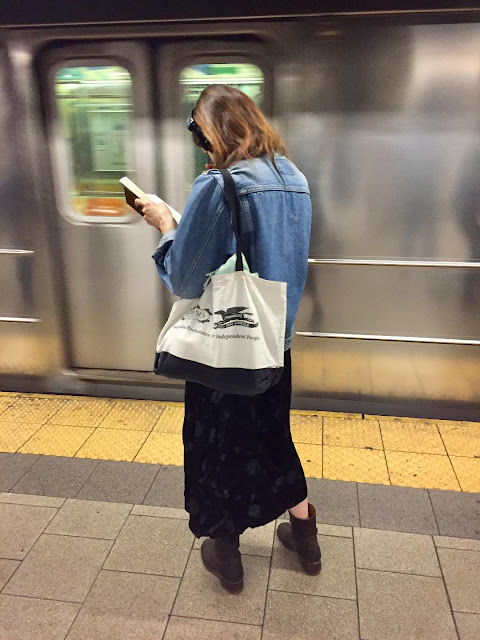 I saw her today and one day last week close to the tracks reading Proust.

Posted by Bill Gunlocke, a city reader at 6:55 AM No comments: 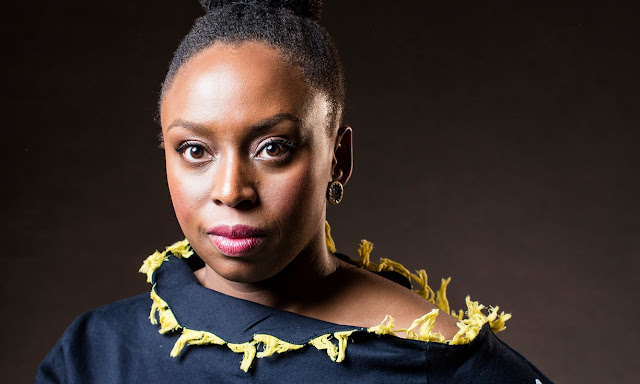 This is from an article in The Guardian about Chimamanda Ngosi Adichie, the Nigerian-born novelist, and her book, Dear Ijeawele: A Feminist Manifesto in Fifteen Suggestions:

Written just before the birth of her own daughter, the manifesto began as a letter to her friend, who had asked for advice about how she might raise her baby girl as a feminist. “Teach her to love books”...


Posted by Bill Gunlocke, a city reader at 2:31 AM No comments:


Mississippi authors have long stood their ground in the South’s competitive literary landscape.
William Faulkner won a Nobel Prize in 1949 for his textured examination of aristocratic decay in small-town Mississippi. Eudora Welty was awarded a Presidential Medal of Freedom for her novels and essays. More recently, the National Book Award winner Jesmyn Ward explored the dark moodiness of race and poverty along Mississippi’s Gulf Coast.
Now they and a host of other literary heroes from the Magnolia State will be celebrated along the newly named Mississippi Writers Trail. This month, the Mississippi Arts Commission received a $30,000 grant from the National Endowment for the Humanities to set up a series of markers across the state to honor the contributions of its most prominent writers.
The first place to be acknowledged will be the home of Ms. Welty, located in the Belhaven neighborhood of Jackson. She lived there from 1925 until she died in 2001, and it is where she wrote nearly all of her short stories, essays and novels, including “The Optimist’s Daughter,” which won the Pulitzer Prize for fiction in 1973. The residence is now a museum for the author’s correspondence and photographs.


“Mississippi has a big presence in the birth of American culture,” said Malcolm White, executive director of the Mississippi Arts Commission. “The biggest asset is our cultural story, and literature and writing is part of that.”
Mississippi is perhaps better known for its music, particularly the contributions of its blues musicians, like B.B. King and Muddy Waters, who defined the genre inspired by African-American spirituals and folk music. And like its neighbor Alabama, Mississippi has chronicled its vivid, often violent, history during the civil rights era.


Mr. Ford, though, had other ideas. In the mid-1980s, the novelist, a former sportswriter, lived in Clarksdale, a small town in the Mississippi Delta 150 miles from Jackson. There, he spent days at the Carnegie Public Library writing “The Sportswriter,” his 1986 novel about a failed fiction writer turned sportswriter whose son dies. (He followed it up with the Pulitzer Prize-winning “Independence Day” in 1995.) In the end, Mr. Ford wanted his marker at the library in Clarksdale, not his childhood home.
“The Delta is where I chose to live,” Mr. Ford said. “Carnegie Library is a refuge. They offered me a haven. I want to be remembered in a place where people could go read books. Literature can be a way for society to address what it doesn’t want to address.”
One of those issues is systemic racism, which persists in America despite the gains made in the 1960s. Mr. Ford, who now lives in Maine, said he recently taught a class in which students had neither read nor heard of “Black Boy,” Mr. Wright’s seminal work that painted a grim picture of race relations when it was published in 1945.
“I have no right to be surprised,” Mr. Ford said. “But that is a book people need to read so that historical anomalies will not be allowed to persist.”


Ms. Ward grew up in Delisle, a small rural community not far from Biloxi. In her most recent books, “Salvage the Bones” and “Sing, Unburied, Sing,” she explores the desperation and occasional hopelessness of rural America in the face of powerful institutions unwilling to address the impacts of poverty, crime and racism, particularly in Mississippi, which is among the poorest states in the country.
“We lived with those real and present problems in our lives,” she said of herself and her fellow writers. “We push back against that narrative. It’s a good thing we are trying to tackle the problems we do. We force readers to be more honest about what it means to be American.”
Not everyone shares Ms. Ward’s optimism, however. The author Joyce Carol Oates recently retweeted a photograph of a banner hanging at Mississippi State University with an image of Faulkner and the phrase “Read, read, read. Read everything …”
Ms. Oates wrote: “So funny! If Mississippians read, Faulkner would be banned.”
Ms. Ward took issue with Ms. Oates and posted a tweet of her own. “Some Mississippians even (gasp!) WRITE. Shocking, I know! Check my previous tweets for references, Joyce.”
When asked about the exchange, Ms. Ward said she was baffled as to why Ms. Oates, who is not a stranger to scrapes on Twitter, would be so dismissive of her home state. “We are already dead last or next to dead last in next to everything,” she said. “At least give us recognition for our literary writers.”

Posted by Bill Gunlocke, a city reader at 6:17 AM No comments: