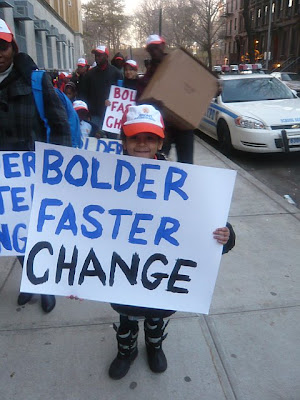 The city’s failure to teach its students to read well is beyond madness.


Let me start with this. It’s the opening of J.D. Salinger’s Raise High the Roof Beam, Carpenters:

One night some twenty years ago, during a siege of mumps, in our enormous family, my younger sister, Franny, was moved, crib and all, into the ostensibly germ-free room I shared with my eldest brother, Seymour. I was fifteen, Seymour was seventeen. Along about two in the morning, the new roommate’s crying wakened me. I lay in a still, neutral position for a few minutes, listening to the racket, till I heard, or felt, Seymour stir in the bed next to mine. In those days we kept a flashlight on the night table between us, for emergencies that, as far as I remember, never arose. Seymour turned it on and got out of bed. ‘The bottle’s on the stove, Mother said,’ I told him. ‘I gave it to her a little while ago,’ Seymour said. ‘She isn’t hungry.’ He went over in the dark to the bookcase and beamed the flashlight slowly back and forth along the stacks. I sat up in bed. ‘What are you going to do?’ I said. ‘I thought maybe I’d read something to her,’ Seymour said, and took down a book. ‘She’s ten months old, for God’s sake,’ I said. ‘I know,’ Seymour said. ‘They have ears. They can hear.’
The story Seymour read to Franny that night, by flashlight, was a favorite of his, a Taoist tale. To this day, Franny swears that she remembers Seymour reading it to her.
I copied that out because I wanted you to hear it. Because it’s beautiful. Because I believe in the ‘craziness’ of it. And because it feels to me like it matters today. Of course it does.

I’ve become as crazy as Seymour about reading. Everything I see in the paper or hear on the radio about schools and kids, I see through the prism of reading. When I read a couple weeks ago that an overwhelming amount of New York City’s public school grads need major remedial work when they go into the city university system, all I could think was, of course that’s true. If they can’t read easily, they couldn’t possibly be ready for college-level studying. It makes me cynical. Cynical that it wasn’t a page one, above the fold, story. What could be more important? What could be more telling about how cities and schools work, than showing the natural outgrowth of our grade schools and high schools not teaching their kids to read well? In 12 years. The papers and radio (and TV probably, too; I don’t watch local TV news.) gave more space to discussions about which teachers will get laid-off in budget cutbacks. Everyone wants to be Woody Guthrie and sing a song about injustice. Well, it’s a way bigger injustice to let kids graduate, those who haven’t dropped out already, without knowing how to read. We’d rather crucify the parents that let their competent teen-age daughter try to sail around the world, than crucify the system that sends its charges out into the choppy waters of society without knowing how to read. Talk about drowning. There are kids drowning all the time in our city, because they don’t know how to read. It’s irresponsible. It’s sinful.

On WNYC, the local NPR station, they’ve had a segment recently where they ask listeners to try to answer the questions the grade school kids are asked on the big all-important science test. I’ve heard a couple installments of it. Part way through each segment I turn my radio to sports talk. I do that to keep from getting mad. Of course the kids can’t answer those questions. The adults hardly can. But the adults weren’t just in science class, like the kids were. The kids couldn’t possibly answer them, because they couldn’t possibly read them well enough to answer them. But that isn’t said. It isn’t said that the kids who need remedial work in college with 12 years of school under their belt, couldn’t answer them. It’s crazy. Even the brilliant, thoughtful hosts on the show, don’t get it. Where’s Seymour when you need him? He knew that the bottle was not what Franny needed in the dark that night, but some other kind of nourishment.

All of the city is outraged now at Mubarak and Gadhafi and the governor of Wisconsin. Of course, who wouldn’t be. But we weren’t outraged even as late as a month ago. Until the citizens took to the streets. What will it take to get us outraged about the schools and their failure to teach poor kids to read? Mothers here are going to have to take to the streets. Will you march with them if they do?
Look how angry we got at No Child Left Behind. Look how we screamed about the Patriot Act. Why don’t we get as riled about the fact that our kids get passed from grade to grade, in smugly enlightened New York City, without knowing how to really read? Why did we worry more about the Patriot Act than we do about the fact that most of our kids can’t read well enough to go into those libraries? Would we all rather be armchair Woody Guthries than Seymour?

Am I crazy to think that if the kids learned to read, a whole lot would change? Colleges would really be colleges and not just places where so many kids are at an 8th grade level, if that. Police and firefighters tests would not be accused of being racially biased, when really they’re only unfair because some of those taking the tests can’t read well enough to answer enough of the questions correctly. Schools could teach challenging content. Teachers could be more enthused about their classes. Imagine what it’s like to teach literature or history to kids who read grades below the level it says on the door. What does class size or school size or teachers salary matter if the kids aren’t being taught read? What do charter schools matter if they aren’t primarily focused on teaching kids to read? From everything you hear, it seems the charters are just better, if they are that, at teaching kids to do well on the big tests. Or they’re better at knowing how to get kids into colleges that have slots available for city high school graduates, even if those colleges know major remedial work will be required. What does that mean? Is that education?

The picture I attached to this is of kids entering the school board meeting in Brooklyn. You’ve heard about those meetings. The parents hissed and booed the Chancellor. It was all about school closings and using space in some schools for charter schools. The signs the kids are carrying say, Bolder Faster Change. I don’t know what they meant by it. They probably meant, make the schools work for us now. Yeah, let’s do that. Let’s think about what would be the essential ingredient that would do that. Can crazy me be the only one who believes reading is the answer?

Franny swears that she remembers Seymour reading it to her.
Posted by Bill Gunlocke, a city reader at 5:25 AM No comments: 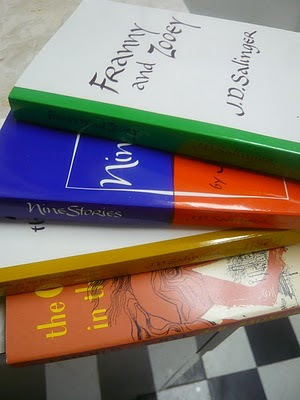 The perfection of pocket-size paperbacks


They ruled once. They were all you could get, after the hardcovers. You’d see them on racks mostly. Like you now see city postcards outside magazine stores. You couldn’t really spin the racks. Most of them were leaning to one side or another, and one rack would sometimes bump into one next to it as you slowly turned it.
You’d see the racks in stores, and airports, in hotel lobby gift shops. They held Peyton Place, The Carpetbaggers, The Catcher in the Rye. In grade school I bought Catcher off a rack in my small-town cigar store. The cover had a boy on it with a red cap on backwards. Adding that picture to the title, I figured it was a baseball book.
You can still get them. Though they don’t dominate anymore. I love ‘em. Sometimes, about to run out the door to meet someone who will keep me waiting, or heading to a subway, I’ll grab one, slip it in my back pocket. I feel young again then. Back in Time. When Vonnegut was still alive, and Cat’s Cradle might be the book on my hip.
Posted by Bill Gunlocke, a city reader at 5:19 AM No comments: 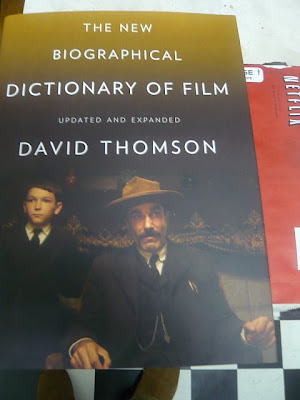 It’s one of those they call ‘the perfect bathroom book’. You can turn to any page and maybe find some entry that’ll matter to you; if not, just turn to another page. I just did it this second , and ‘Peter Falk’ was there. There are 1500 entries. I just tried it again and there was ‘William Hurt’.
It’s not just dry biographical notes either. Or italicized filmographies. David Thomson, who taught at Dartmouth, is opinionated and will challenge you, maybe make you mad. He’s got his own tastes. You’ve got yours. Oh, he’s smart. It’s fun to disagree with him.
It’s almost 1000 pages. Get it for yourself . We’re movie crazy, aren’t we? Soon, the way they’re talking, they’ll be more movies than you can look at, on the computer. This book would be a good companion for all that.
Posted by Bill Gunlocke, a city reader at 5:15 AM No comments: 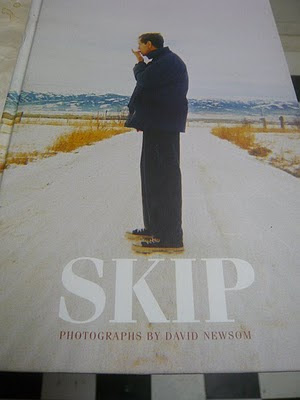 A small photo book I saw in a frame shop in Wyoming. I wrote down the title and ordered it when I got home. It’s a story about the photographer’s brother. The other day I noticed that Viggo Mortensen edited it.
Posted by Bill Gunlocke, a city reader at 5:11 AM No comments: