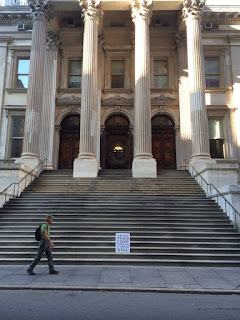 DAY TWO AND I’M ALREADY INCLINED TO skip what I said might be an everyday blog routine. I held my sign of course this morning for almost an hour. It was cold for just a crew neck sweater and a knit cap. It’s colder downtown. But I didn’t wear my gloves. I had them in my Patagonia bag that I keep just off the sidewalk, but I like the way the edge of the sign feels on my fingers. I try to hold it mindfully for an hour. Mindfully is a trendy concept now, but it does describe what I try to do with the sign. The sign is everything. I’m just the guy with the easy, small-town demeanor holding it. Three people today asked if they could take pictures of me with the sign.
Posted by Bill Gunlocke, a city reader at 2:55 PM No comments:

SOME YOUNG WOMEN, SOMETIMES YOUNG MEN, pass by the sign and me, with strollers to 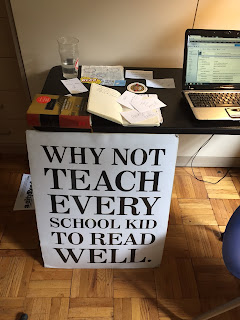 take their younger kid or kids along, while they drop off their older child at the pre-school on the block. One tall mother--Indian, I’d say almost certainly--stopped in front of me yesterday and, with a British accent that made me throw my shoulders back, asked about the sign. I told her that the sentence on the sign came to me on my couch one afternoon and I felt it was my duty to pass that message on. She nodded, and immediately mentioned Black city kids. She recognized, she said, after just being in the states for six months, that the ‘achievement gap’ was a pressing issue, and rightly assumed that my sign was mostly aimed at that ever-present disparity.

She said she’d recently seen some short documentary film on TV showing the differences in the facilities between a middle class white school and a poor Black school. It was startling news to her. I said, probably too cynically, that such reports were things we’ve been seeing and reading about for decades here. I told her that’s why I hold the sign, hoping that its message might penetrate the system and make the system put reading at the very center of everything. It would give direction to the whole enterprise. Whatever was needed to make certain that every kid was taught to read well would be implemented. The schools which now seem ‘underclass’ would have to be brought up to high standards to get the job done. The school system could not wait until society’s inequalities were brought into balance to make the transformation to a reading-well-before-all-else curriculum. In fact, I said, equality will not happen until this reading success is achieved. Which is what I believe most of all. Which is why I’m there every day.

She and I will talk more I think.
Posted by Bill Gunlocke, a city reader at 12:13 PM No comments: