I WAS BORN IN A SMALL TOWN

That’s where I got to know my first memorable mayor. 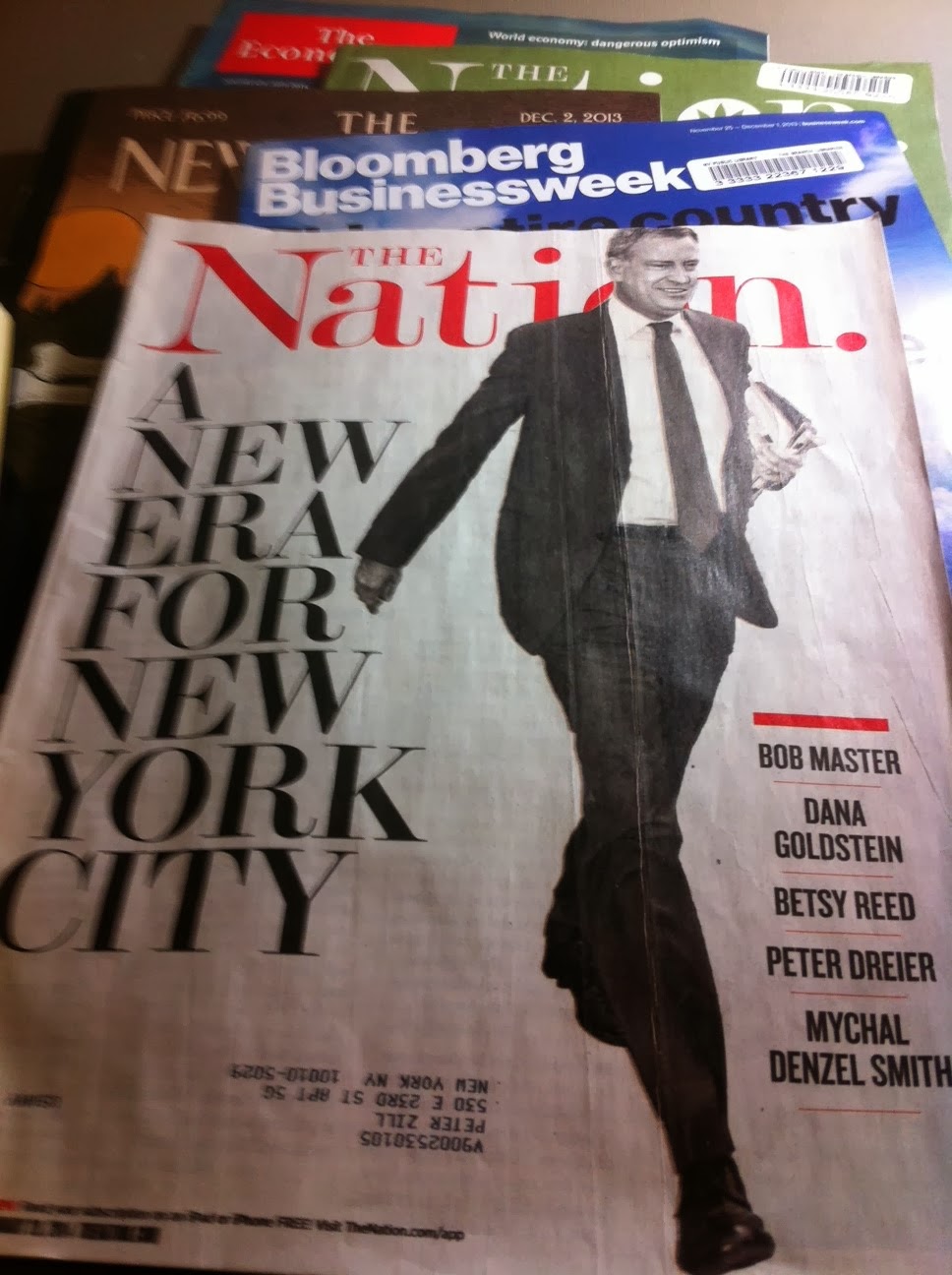 ‘Beany’ Pealer was the first mayor I noticed. It was in the early 1960s, in my small hometown, in a rural county somewhere southwest of the Finger Lakes. I was a young teenager who liked to hang around our one-block-long Main Street, going in and out of the stores, buying gum or candy, and baseball cards, or something from the little bakery run by a family of bright-orange-haired Fitzpatricks, looking at sports magazines and the paperback book racks, and at all sorts of stuff, giggling with my buddies, sometimes being asked to leave the stores. I wasn’t old enough then to hang in the pool hall, which is what I wanted to do. Of course. That’s where the cool older guys hung out. Smoking. Drinking pop. Playing the juke box. Talking about girls. Swearing in loud inventive ways at each other. ‘Beany’ Pealer ran the pool hall. There was a shoeshine chair in the front of the place by the window. The 60-year-old mayor of the town would shine your shoes for you for a dollar.

Right after college I moved to Cleveland where I’d found a job teaching English and Reading to 6th graders in an ‘inner-city’ school. I was married with a month-old daughter, and I needed a deferment from the draft. Teaching school got you out of going to Vietnam. (One of the kids who used to hang around Main Street with us, didn’t get a deferment, and he was killed in the war. For years, when I‘d go back to the little town, a small military flag memorializing his death in the jungle hung in his family’s front window.)

It was 1969 when I got to Cleveland, and handsome Carl Stokes was the mayor. He was America’s first black mayor of a major city. Teaching in the inner-city, having historic Carl Stokes as the mayor, made Cleveland seem like part of The Movement to me. Some years later Dennis Kucinich became the mayor of Cleveland. He was little, but that was big. Movement-like, again. The whole country watched him take on bullying utilities and bankers. I reconnected with him for a minute in New Hampshire maybe 10 years ago when I happened to be there visiting a favorite cousin from my old hometown during the primary when Dennis was running for president. I saw him in a crowd of TV cameras and lights, his big familiar teeth whiter than they’d been in Cleveland. We hugged hello and chatted for a few minutes, each professing to the other that seeing each other had made our day.

So, I don’t know how much a character this new mayor here is supposed to seem to me. I mean, after ‘Beany’ Pealer and Carl Stokes and little Dennis.

De Blasio’s not a rambling, inventive, radical talker like Norman Mailer was when he ran for mayor, but I suppose after Mike Bloomberg they have to position him as a real progressive, and even as a radical.  He doesn’t look like one. To me, he looks too much like the old basketball coach, Digger Phelps, to be a radical. But we’ll see. I like that he is letting the newsstand guy stay at Astor Place. I like that I heard he wants the cars and trucks and buses to slow down. It’s beyond insane that they barrel through the city streets and through red lights with impunity. It’s a sin that the city lets it go on.

Like it’s a sin that it allows its schools to keep passing on students who can’t read well.

Here’s something I read recently and posted on Facebook:

IN A CNN STORY llast week, Willingham said her research of 183 football or basketball players at the University of North Carolina from 2004 to 2012 found 60 percent reading at fourth-to eighth-grade levels and roughly 10 percent below a third-grade level. She said she worked with one men's basketball player early in her 10-year tenure who couldn't read or write.

The University of North Carolina, in my mind, is one of the good public universities. Like Wisconsin maybe, or the University of Virginia. Or just a cut below. Anyway, you’d think that any student there, jock or not, would read better than that research showed. And I’m not naive. I know a lot of jocks get a break. I know they have tutors and they all study together and they have advisors that know easy courses and easy professors. But how, with only grade school proficiency, can they even read the simplest text books or handouts or short stories in English class? How can they really function as college students?

I’d ask the new mayor if he has any plan to make it so no high school grads from the public schools here read that poorly. He hasn’t made any statement about reading at all. Neither has his new Chancellor. I’ve read about cutting back on testing and I’ve read about limiting some things charter schools do now. I’ve read about taxes to get money for city-wide pre-K. But really nothing about reading. At all.

A few people who walk by my sign have made comments to me that maybe now things will improve. They mean, I assume, that de Blasio will start to implement what my sign suggests; WHY NOT TEACH EVERY SCHOOL KID TO READ WELL. I don’t respond, other than with a little smile and with my eyes raised in a way that says I hope so. I try not to look cynical. 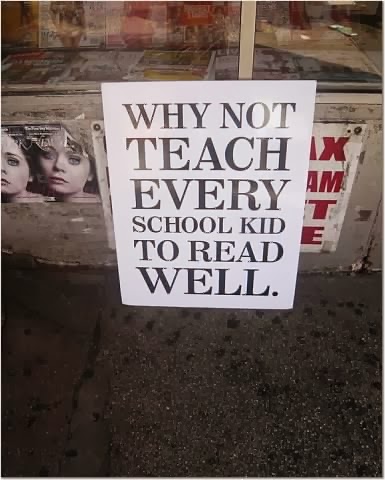 Sometimes I’d go in the pool hall with a buddy of mine who was older. He was Beany’s kid. The guys that hung out in the pool hall were all characters. They were funny. One guy was known as Publius. He called himself that. He must have taken a little Latin in school. Another guy was called, of all things, ‘the mayor’. He was from a tiny little clump of houses outside of town. His parents ran the gas station-with-a-little-store along the highway. I guess that’s why he was called the mayor. He was a very good pool player. I can still see his three fingers rhythmically moving under the front of the cue as he got ready to softly strike his shot.

These guys were not doing much homework or on the debate team or on the yearbook staff at the high school. They were thinking about cars. Or Elvis. Or girls. Or beer. Some had rubbers in their wallets. But they could read. They read car mags and sports magazines and skin magazines. There were music magazines then, with lyrics to the latest tunes. They probably read those. Even though they weren’t going to go on to college, they could read better than those kids who couldn’t read much at all at the University of North Carolina.

New York City is very different from that part of the state. It has things those of us on Main Street couldn’t have even imagined; sophisticated, artful things, and unspeakably impoverished things. It’s a big place to be the mayor of. One thing the new mayor talks about is narrowing the gap between the rich and the poor here. I’ve got a sign with a message that could tell him where to start.
Posted by Bill Gunlocke, a city reader at 7:45 AM No comments:

Email ThisBlogThis!Share to TwitterShare to FacebookShare to Pinterest
My Book In Hiding
The mammoth novel I swear I’m going to get to

In my top books all-time, I’d put Peter Matthiessen’s The Snow Leopard right near the top. Sometimes
I say it’s the best. I’ve only read a couple of his other books. One on Buddhism. One on some fishermen
on Long Island. The big book of his that I know I’ve got to read is Shadow Country, a huge historical novel. I have it at home in a beautiful paperback.
But it intimidates me. 892 pages. 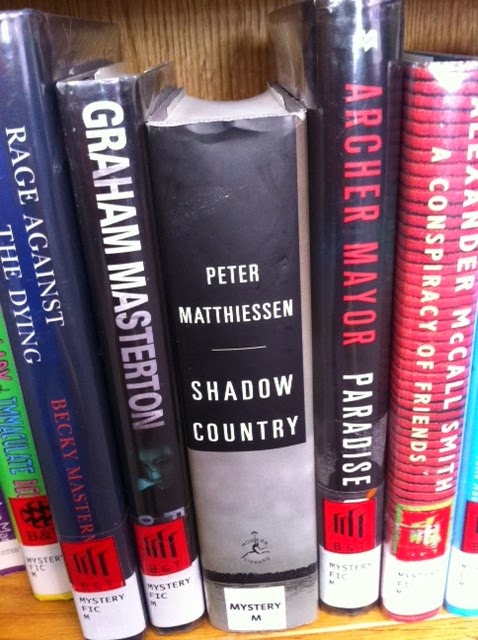 At my branch library, I noticed it wrongly-shelved among the mystery books. I've picked it up and held it. It feels better than my paperback. I think I’ll read it in little portions at the library, carefully putting it back where it doesn't really belong.
Posted by Bill Gunlocke, a city reader at 7:34 AM No comments:

Email ThisBlogThis!Share to TwitterShare to FacebookShare to Pinterest
For A Shelf-Centered Guy…
It’s unbelievably great to have a library branch just two blocks 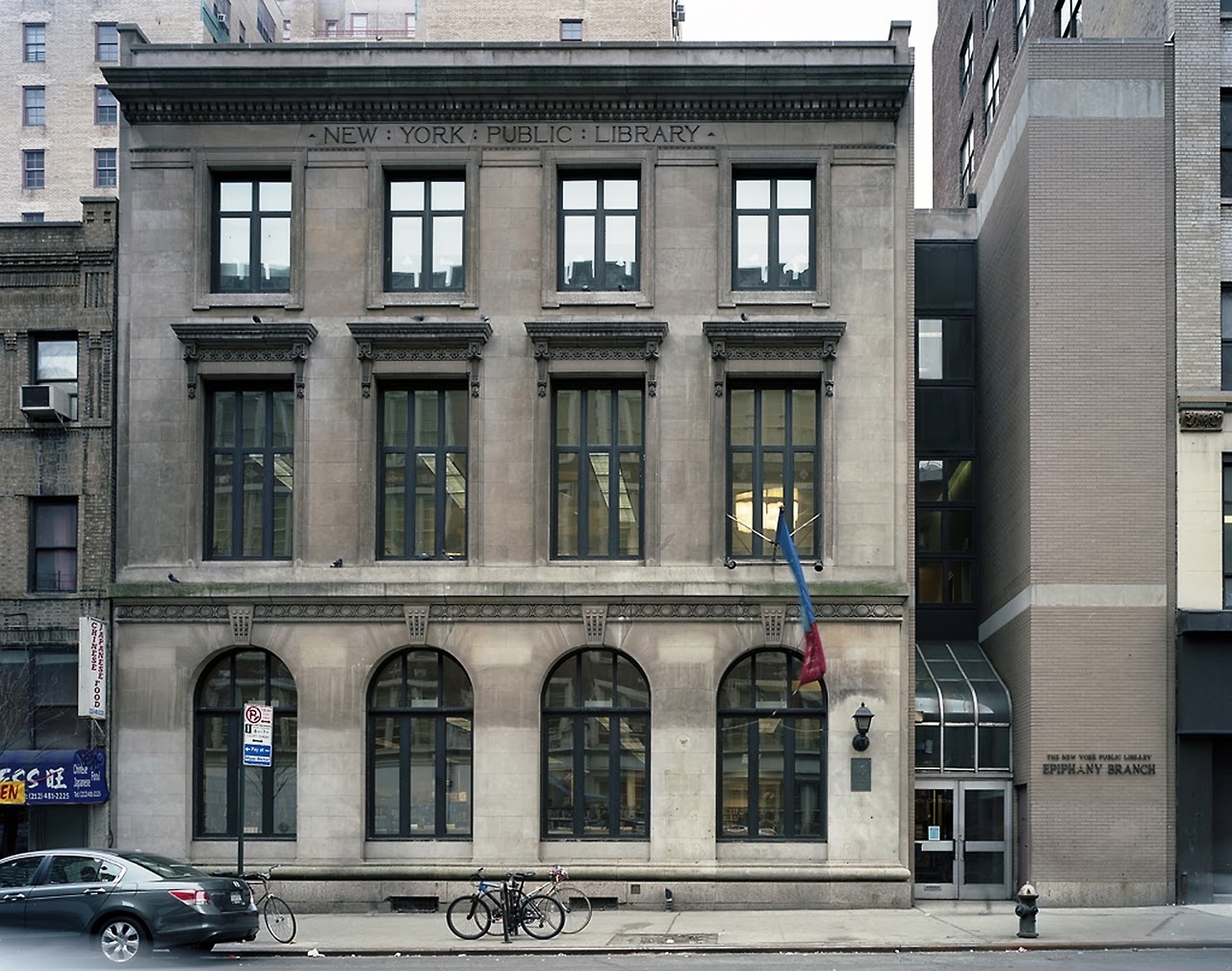 You can’t stay in your apartment too long. That’s why there are bars everywhere here. Why sit in your apartment and watch a game when you can walk less than a block and have a beer and bullshit with some guy about the game? That’s a heaven for me.

Another heaven, a daytime heaven, is to pack up my notebooks, and maybe my laptop (I say maybe because part of the fun of escaping the apartment is to get away from the computer), and go to the Epiphany branch of the NYPL on East 23rd Street. Since it recently re-opened after months of structural work, I come six days a week. Lucky me, I say to myself.
Posted by Bill Gunlocke, a city reader at 7:30 AM No comments: 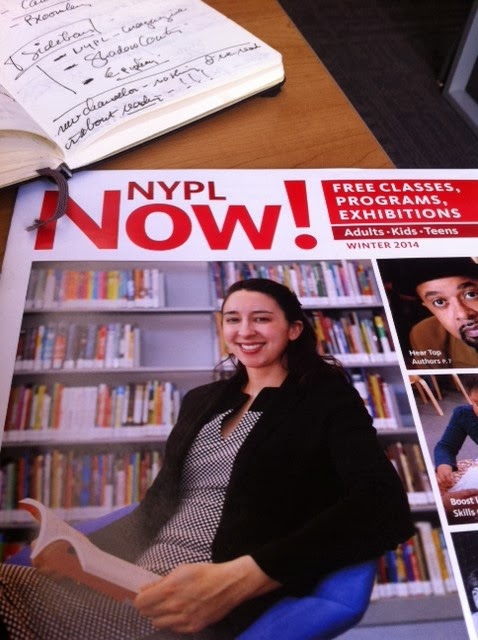 Stop at your local branch. Pick up one of these magazines. Start to hang out there.
Posted by Bill Gunlocke, a city reader at 7:26 AM No comments: