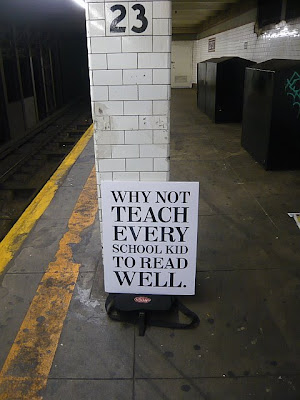 Thinking back on a conversation with a young woman about the meaning of things.

I should let the sign do the talking. It says exactly what I think. But sometimes people ask me about it and I have to say something.

Last week a young woman who works for the Department of Education, whose big building I stand in front of on the sidewalk every morning for an hour with my sign, approached me and said she sees me there and don’t I think they’re doing that, teaching the kids to read?

I rushed out an answer; something about how the numbers we read in the paper, the reading scores, show that, no, they certainly aren’t teaching the poor kids to read well. I said it too hurried probably (there were people passing us there on the sidewalk and I wanted them to see the sign), which, I’m sure, made me seem distracted and aggressive. I felt glum later that I’d poorly represented my thoughts to her. Which is of course why writers write: to give a more extended answer/critique/suggestion to the things they see wrong with the world.

Here’s what I should have said. I should have said how dare the department begin yet another school year without a plan to attack the sinful lack of ability to read well that so many of their students suffer from? I should have said I hadn’t read anywhere that some new plan was in place to rectify that. If she’d said the Common Core curriculum was going to do that, I’d have said, no it’s not. Not that it’s a bad idea for a program, but it’s just not meant to tackle the tough stains. Something stronger is needed for that.

I thought about taking my sign to the debates the candidates for mayor have been having. But I decided to keep holding it in just the one place I hold it in the morning on Chambers Street. I wasn’t going to chase down the pols. I don’t think much of this batch at all. None of them has spoken about the problem I see as the most urgent: teaching all the school kids to read well. These candidates are an unimaginative group of people.  How could they not see that as the biggest problem? It really is the crucial problem. Solve it and almost everything else will fall into place. Sometimes when a person walking by my sign will say, I couldn’t agree more, I’ll say, it would change the world. They almost always nod in agreement.

Just before Labor Day I took the train to Chicago to meet up with one of my sisters and my niece to drive to Northern Michigan to my other sister’s cottage. I like the train. I like looking at the Hudson River out the window. It’s a long ride, but I take a book with me and some magazines and a notebook. You can walk through the cars and look at people. The poor people sleep almost the whole way. They bring old pillows and sheets. They don’t read. They look at movies on their screens when they aren’t sleeping. Their kids aren’t reading anything either. They’re restless and you hope you aren’t sitting across the aisle from them. If I had a chance to talk to the young woman again, I’d tell her about the train.

The book I took with me, Zen and the Art of Motorcycle Maintenance, I’d read 40 years ago when I was a teacher in Cleveland. I taught school to get out of going to Vietnam. A lot of young men did that then. It wasn’t only to avoid the draft that we did that. It was an idealistic time and teaching in urban schools was a way for us to change the world. The book evokes that era. It brings back vivid, wistful feelings. It’s not lost on me that I still say teaching poor kids to read well could change the world. I believe it. It’s tragic that that mission is still not being accomplished. Forty years later. My hair’s turned gray. I have five grandchildren.

Here’s the first paragraph of the book.  I can see by my watch, without taking my hand from the left grip of my cycle, that it is eight-thirty in the morning. The wind, even at sixty miles an hour, is warm and humid. When it’s this hot and muggy at eight-thirty, I’m wondering what it’s going to be like in the afternoon.

Reading is our best, most enduring pastime. TV and movies are stimulating in their way. So is listening to music. So is noodling around on the computer. Sports and exercise excite parts of us. But reading is that quiet, deeper pleasure that talks to us privately. It makes us dream our dreams. I’d like to have said to the young woman the other morning that we’re taking dreams away if we don’t teach kids to read well. 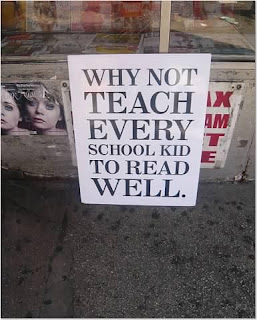 What she really should do is hold my sign for a week. She’d see the faces on people who look at the sign.
I just hold the sign. I take no credit for its message. That came to me from I don’t know where. Maybe in a dream I had.

Another school year is beginning.  I’m excited. Kids will be back on the street where I stand with the sign. College kids. High school kids. Little kids with parents or nannies. Some in cute uniforms. Some of the little ones will try to read the sign. They’ll keep looking back at it as they pass me. You should see their faces when they work their way through the words and decipher the message. They’re very proud of themselves.
There are some adults who also look back as they pass. They couldn’t read it at a glance. You wish the young woman could see that. You wish she would tell her next department meeting what she saw.

I take the 6 train in the morning, with my sign and a book and some of these newsletters, from where I live on Third Avenue in the 20’s down to Chambers Street. It’s a quick trip and I maybe get three pages read each way. I’d get more read if I didn’t look around at the other riders so much. Many, maybe most, of the people are the same every day. I like to see what they’re reading. More people than I would have guessed are reading the free paper they hand out at the subway stops. Some people are reading a daily newspaper. Some have Kindles. Not that many though, which surprises me. The people I stare at the most are the Asian mothers or fathers or grandparents with little kids. They make sure that the kids have something to read, or they give them word search pages and a pen or pencil to pass the time till they get to Canal Street. If I had not been in such a hurry when I was talking with that young woman the other day, I could have told her about that train ride too.

Posted by Bill Gunlocke, a city reader at 8:30 AM No comments:

Email ThisBlogThis!Share to TwitterShare to FacebookShare to Pinterest
Highway 74 Revisited 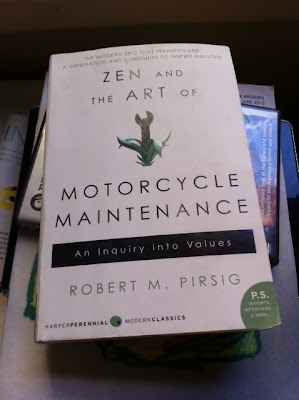 On the road again

I read it on the subway. In the morning when I’m coming and going with my sign. I get at most three pages read each way. The book will last me a long time at that rate. I want it to.

This book is extraordinary. Then and now.
Posted by Bill Gunlocke, a city reader at 8:19 AM No comments:

Email ThisBlogThis!Share to TwitterShare to FacebookShare to Pinterest
The Great Outdoors 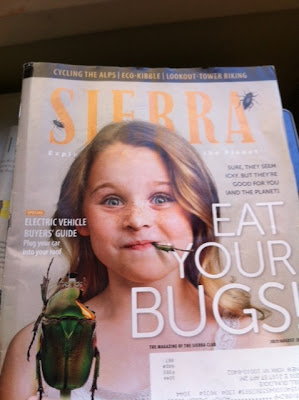 A stimulating way to help keep it great

You don’t have to be green-all-over to think this is a very good magazine.  In fact, if you aren’t all that green but are concerned, Sierra is a good place for you to jump in.

It makes you think.

You can get it free six times a year with a Sierra Club membership. Or for $15 if you’re not a member. http://www.sierraclub.org/sierra

Your kids will like it too.
Posted by Bill Gunlocke, a city reader at 8:16 AM No comments: 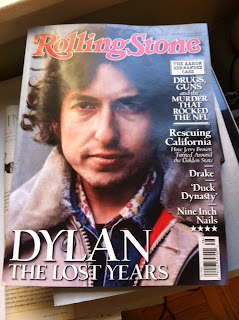 September 13 issue.
Posted by Bill Gunlocke, a city reader at 8:13 AM No comments: