What Would I Do? 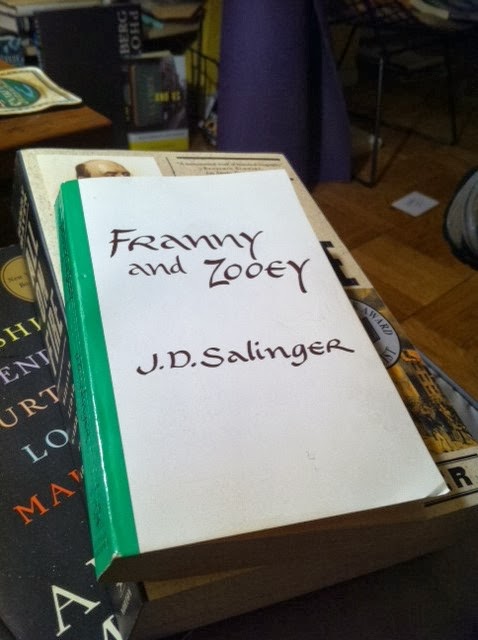 What would you do about it? Someone I hadn’t seen in a few years asked me that the other day. We were having coffee, not far from Times Square.

I never have the same ready answer. Reading Academies was what came out of my mouth this time. I said I’d call all the schools here Reading Academies. People look at me when I say that. He looked at me. I assume they want to know what I mean. It’s such a phony-sounding thing: Reading Academies. I think they’re surprised I’d be for that.

So then I say that the schools should make certain that all the kids they have can read easily. That should be the goal, before anything else. Going to college should not be the goal. Learning to read well should be. College will take care of itself if they can read well. The way it too often is now is that many kids who can’t read well at all are going to college. Of course they aren’t really going to college. They’re taking remedial classes. Three quarters of the New York City public school kids who enter the city college system here, need remedial work. Who’s been letting this go on? Someone (almost everyone apparently) must think it justifies the public school system by having a lot of kids going to college, even if they aren’t prepared, by them, to go to college. Even if they can’t read well enough to read the text books or the literature books.

That’s preposterous, don’t you think? You don’t have to answer. Of course you think it is.

So, I’d stop running the schools the way they’re run now. They haven’t been working for poor kids for a very long time. Way before No Child Left Behind and ‘testing’. Way before charter schools and Common Core. That’s, of course, why those programs sprang up. 75% of the public school kids here aren’t reading well at all when their high school days are completed. And that’s after 10 or 12 years of going to school here in New York City. You wouldn’t think that. You wouldn’t think that here, where Random House is, and Scholastic is, and the New Yorker is, and the Times Book Review is, that such failure at reading would go on; would be allowed to go on.

I believe that if the schools were transformed into Reading Academies, things would be much better. For everyone. Reading Academies would, by their very nature, place reading at the center of their mission, and their curriculum. They would set the standard by which pre-K’s and kindergartens were structured and measured. Everyone would know that beginning with first grade, the school system was going to require reasonable but strict standards in reading for promotion. There would be no exceptions. Parents would have to know this clearly, of course. Eventually everyone would know it, like everyone in Green Bay knows when football season starts. It’d be in the air here. Like it should have always been in New York City. Why isn’t it? Why does New York, the media/cultural/publishing capital of the world, do no better than other big cities at teaching its most-crucially-in-need-of-knowing-how-to-read students how to read?

If all the schools here focused on reading for all 12 years (and not just in schools where poor kids go; all schools), the teaching staff would need to be different. The Reading Academies would need to be staffed with many teachers who were English majors in college. English majors love to read and write. They’re who you’d want in the academies. People who liked to work with books and who like to work with sentences. People who would not accept their students reading poorly and who would read themselves when the kids had quiet time to read.

English majors have a tough time finding jobs that have to do with their love of language. Teaching in New York City would be a dream job for many of them. Especially in these Reading Academies where reading and language would be at the core of the school day. 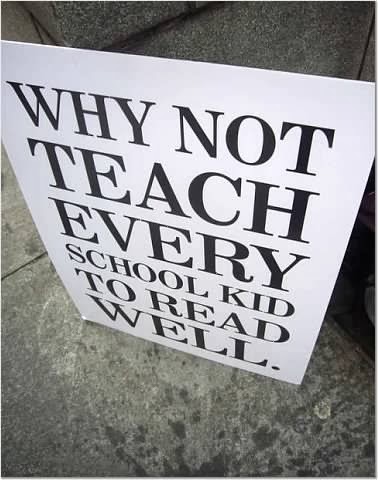 If these academies, with their staffs of English majors (of course, there’d be science majors and math majors, too; no more education majors though) are going to run efficiently and joyfully (and why shouldn’t they run joyfully?), there would have to be reasonable quiet in the school. You can’t read and write in noise. The principal and his or her staff would have to maintain order. It’s not a job for English majors or science majors or history majors or math majors. The principal would have to see to that. But it would be easier to keep order in a Reading Academy than in an old school. Reading Academies have right in their name what they’re about. And reading requires quiet. Kids in the hall would know why they have to keep it down. Those in charge of keeping order would have a real reason to tell noisemakers to be quiet; not ‘just because I said so’.

On another day, over coffee, maybe something else would have come out of my mouth, when I was asked what I would do.  There are certainly other things to do, but the schools where the kids go every day must be different than they are now, and changing them to Reading Academies would be a way to make them different, and better.

All I really remember of my early years in school, besides my friends up and down the aisles, has to do with books and pages. All the pages had words on them, even the math books. Before school, there was the morning paper’s sports page to read. After school, there was an afternoon paper with scores from the late night games in California. When the mail came there was always a magazine like Life or Look or the Saturday Evening Post or Collier's or Time or National Geographic or Sports Illustrated. My father read four newspapers, before and after running a big company, every day. He could seldom be coaxed to come in the living room and watch TV with us. He had so much interesting stuff to read.

I’ve got interesting stuff to read too. Books and magazines and newspapers. I am reading four books right now. Two novels and two histories. Actually I’ve got five going. I forgot about the book I have in my bag that I’m reading on the subway every weekday on my way to hold my sign. It’s Jane Jacobs’ famous book about cities. The other night I couldn’t sleep. I tried sports talk on the radio to put me back to sleep, but the commercials are so loud at that time of night that I almost screamed back at them. So, I turned the little clock-radio off and I turned the light on and I got up and grabbed a mass market paperback off the shelf, because it jumped out at me as books do when you need them. It was Salinger’s Franny and Zooey. I went right to Zooey, and in the wonderfully funny bathroom exchange between a son and his mother, I got what I needed to get right enough with the world to go back to sleep. Thank God for books.

My father built a new public library in my little hometown before he died. He’d be shocked if he knew how the schools here in the big city he loved to come visit and do business in failed at teaching so many of its school kids to read well. We should all be shocked.

Posted by Bill Gunlocke, a city reader at 9:41 AM No comments:

Email ThisBlogThis!Share to TwitterShare to FacebookShare to Pinterest
Take Your Kid

Or take the kid in you there

The aisles are nice and wide so you can easily bend down or kneel to see the books on the lower shelves. 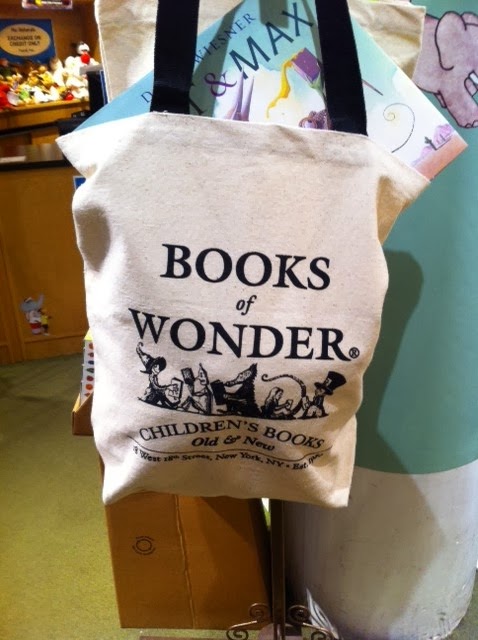 I don’t go in there enough. When I do, I say I should come once a week. There’s good coffee and sweets and a few sandwiches in a little café area. Some arty high schoolers were sitting in there when I was there. That was cool, too. There are books for kids like them in the store.  There are first editions and famous illustrations for sale in back.

It’s Books of Wonder, like the bag says, on 18th Street between 5th and 6th, south side of the street. See you there maybe.
Posted by Bill Gunlocke, a city reader at 9:11 AM No comments:

Email ThisBlogThis!Share to TwitterShare to FacebookShare to Pinterest
The ‘X’ Factor 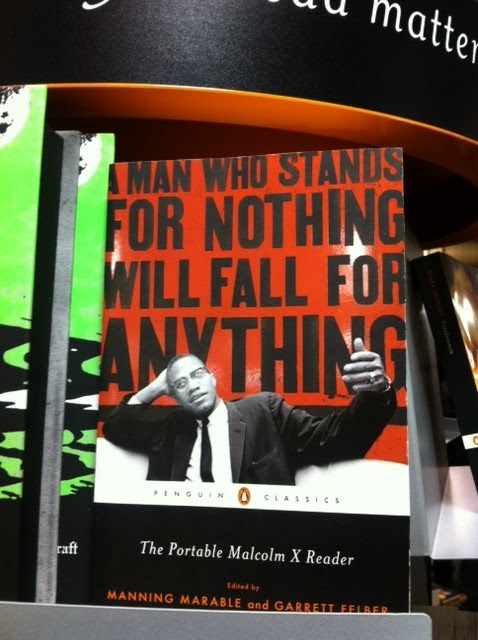 If kids read poorly, they have no chance of understanding books like this. They’re left with the movie, which is never the same. It never is. You want a book like this to be a bible for you, if Malcolm’s your guy. You don’t just want a movie.

A book is the only entertainment that can be just yours. You can find and read a book on your own, at your pace. Everybody’s seeing the same movies, and TV shows. How radical is that?
Posted by Bill Gunlocke, a city reader at 9:09 AM No comments: 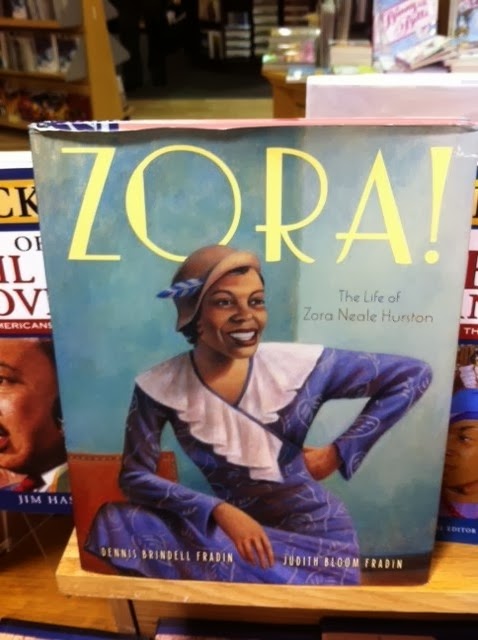 An irresistible cover. What if every first grader had books like this?
They can have them. They’re at the library.
Posted by Bill Gunlocke, a city reader at 9:00 AM No comments: