How a high school kid was smitten by a book. 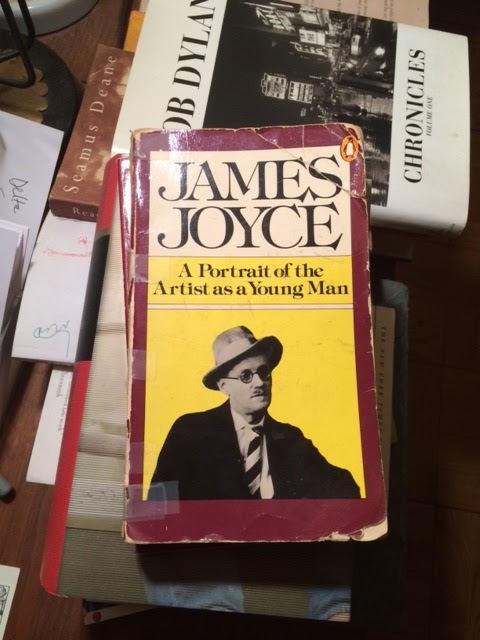 It’s 1963. I’m 16. I’m standing on the bottom step of a wide, curving staircase. I’m a junior at an all-boys Catholic boarding school just outside of Washington, DC. I’m in a wrinkled blue blazer, a button-down blue shirt, and an every-day striped tie. I’m too warm in the blazer in that autumn’s humidity. And I can’t wait to get up to my room to throw the wool coat off onto the bed, and to sit at my desk and have a cigarette and write a letter to my ‘hot’ girlfriend back home and listen to a song or two from a new folk music album that I’d bought the Saturday before. We were allowed to leave the school on Saturdays to take a city bus a half hour or more into DC.

If you were looking down at me from the landing of the staircase, you’d see I was by myself. You’d see I was standing sideways about to go up the stairs to my room on the third floor, looking back at something in the foyer of that main building where the headmaster’s office was and where just at that moment a bell had rung ending 9:30 classes. The door of the classroom closest to the foyer was pushed open to the relief of 20 or so seniors who poured out into the long hallway bumping each other and talking and laughing loudly under the high ceilings of the old building, in their heavy blazers, a few in seersucker or madras sports coats. Some wore desert boots, a couple guys dared saddles shoes or white bucks, many had on weejun loafers whose leather heels you could hear clapping against the hallway’s shiny marble floor.

If you were looking down at me and this crowd of older carefree teenage boys from a landing that allowed you to see down into the future, you’d maybe gasp, knowing that a little more than a month from then our rambunctious lives would go suddenly quiet. The school was just down the road from Bethesda Naval Hospital where the body of President Kennedy was transported from Andrews Air Force Base that dark night in November when no wool would keep us warm. We were stunned kids that night and the few days after, all way too far from home.

On this morning I’m still watching the seniors rumbling out of the room where they’ve just had English class. Most of them are heading my way, about to then turn away from where I’m standing to go out the heavy tall doors to the front of the school to continue their talking and, for those many who smoked then, to have a cigarette. Brotherless, I would often watch the older guys to see how they acted. That’s what has me stopped on the first step this day. They look like college guys to me. Many of them are bigger than I am. Some of their blazers are almost threadbare. A few have masking tape on their old loafers to keep the loose soles from flapping. It’s their last year. They are choosing where they will go the next year. Many will choose schools like Georgetown, or Holy Cross. Some will get into the Ivy League. A few will head out to the midwest to go to Notre Dame.

Beyond watching what they are wearing or how they are laughing, I am for some reason this day, fixed on what the lead guy has in his right hand, the one closest to me. He walks near me, unaware of me, before veering away toward the big doors. He is carrying a notebook and a paperback book. The book is what they must be reading for class and it gets my attention this day. His wrist is covering some of it, but I can read the title. A Portrait of the Artist as a Young Man.  I am transfixed by it. I want to be that guy. I want to be reading that book. The way he’s carrying it. The way the book looks. The title. It feels important to me to go where that book might lead me. I watch it go out the door with him. Then I turn and go up the big stairs to my room.

I have always cared about books. I would go into the library in my small town a lot. My friends who I 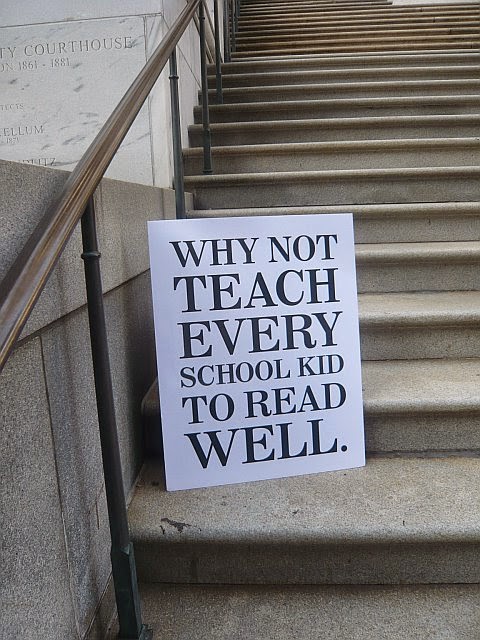 played sports with and talked about girls with didn’t go. I was drawn to the shelves and titles. I would roam the rooms of the library which was in an old house. The library in the next town over where my girlfriend lived had a bigger library. It too was in an old house. It was on Main Street. We’d sometimes stop in there on our way to the Sugar Bowl where we’d go to have cokes and french fries. They had a good juke box in the Sugar Bowl and I’d play songs by the Crystals and Skeeter Davis.

Where I live now is close to a library. I stop in almost every day. I go to bookstores, too. My favorite is a 20 minute walk away in the West Village. The big Barnes & Noble is less than 10 minutes away and I frequently go in there and roam around. Sometimes I even take photos of books that look good to me. All the places I go have paperback copies of  A Portrait of the Artist as a Young Man. If I see a new edition, I buy it. I’ve read it more than a few times. We never did read it in the AP English class in my senior year like I thought we would. The teacher did though read us two stories by a promising new author named John Updike.

In the library and the bookstores I go in now, they have Teen sections. They give a lot of space to teen books. They have displays where new titles are showcased. Some of the books have wonderfully-designed covers. I wonder how many kids are buying them. I wonder how many school kids can read them. The library has a Teen section too with some of the same books. I wonder if the kids in the poor sections of the city can read them. If so many kids in the city can’t read near their grade level, how can they be interested in these teen books, or any books?

Posted by Bill Gunlocke, a city reader at 8:18 PM No comments:

Email ThisBlogThis!Share to TwitterShare to FacebookShare to Pinterest
This Smarts

Why some countries are besting the U.S. in school 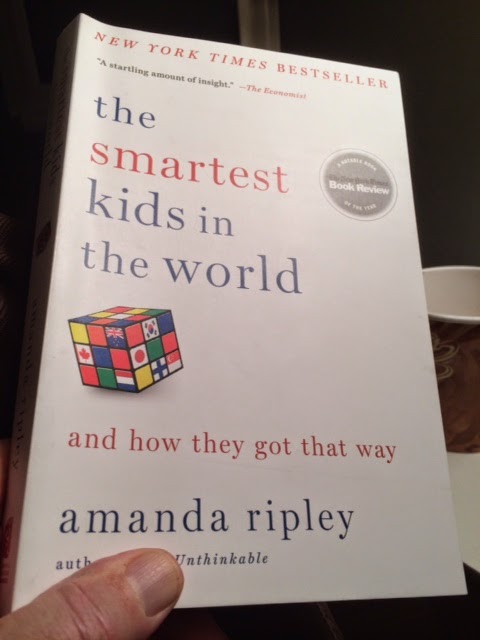 You wondered if you were reading right when you read how Finland’s and other countries’ schools had blown by us in language and math. You maybe came up with your own explanations. Amanda Ripley studied it and now you can read her better informed explanations.

She followed three U.S. kids who went to school in South Korea, Poland, and Finland for a year. What they and she learned is eye-opening. It isn’t money. We spend the most. What don’t we do that they do? Ripley found out.
Posted by Bill Gunlocke, a city reader at 8:09 PM No comments:

Email ThisBlogThis!Share to TwitterShare to FacebookShare to Pinterest
Out of Africa

The war in Biafra gave birth to Doctors Without Borders 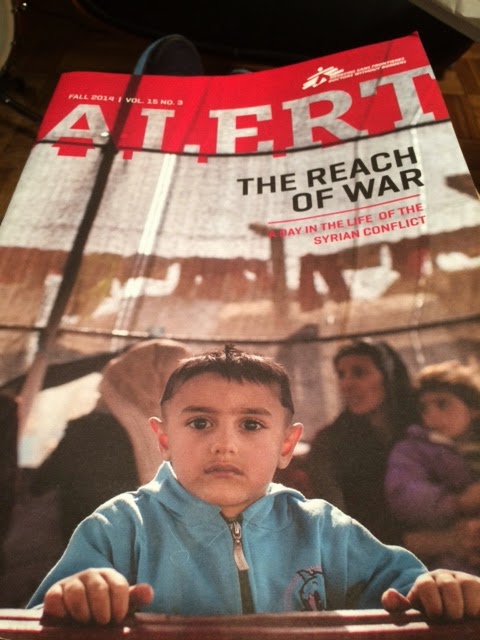 With the Ebola crisis, you read about Doctors Without Borders more now; you see what they do on TV. They seem fearless. They do all they can. They could do more with more help from us. They are mostly privately funded. 80% of their resources come from donations.

I’ve only given them $25. But they send me their magazine. It highlights the problems they’re working on. You’ll be glad you sent them something. So will they and those they help.
Posted by Bill Gunlocke, a city reader at 8:04 PM No comments: 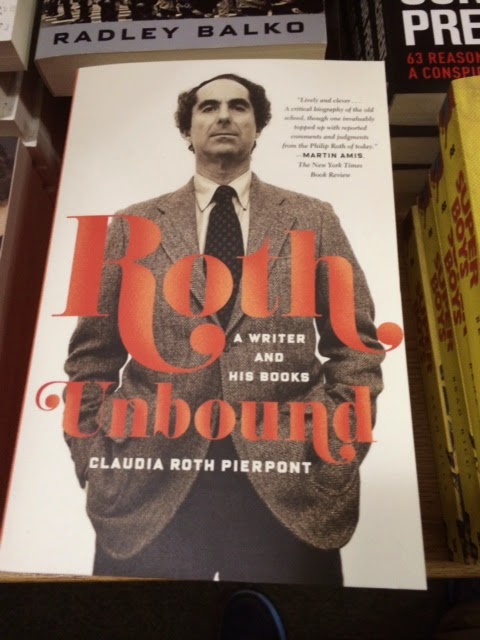 Not Portnoy’s complaint; my complaint: How Come Philip Roth again didn’t get the Nobel Prize?
Posted by Bill Gunlocke, a city reader at 8:00 PM No comments: