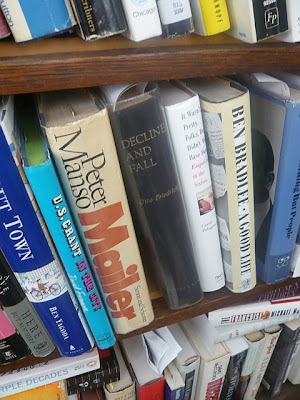 Near Boston. In A House Filled With Books

Nirvana for me normally. But I miss holding my sign.

I’m watching a friend’s house and his ailing dog while he’s in California for a daughter’s wedding. The house, if you’re a book person, is what you dream about. Books in every room. Three floors. Lumpy New England old-red-brick sidewalk out front. House right up to it. He’s a former magazine editor, so there are still subscriptions to Seattle magazine and the like. Framed things everywhere. Walls filled with them. Others propped around on all the floors. It’s like the Strand Bookstore.

There’s not really a TV. There are a few flat screens that another friend of his bought for him, wrongly thinking he’d see the light and get cable and use them. I tried the one in my bedroom the other night. All that came in were two New Hampshire PBS channels with shows about quilting and regional cooking. It’s nice to have no TV to default to. You listen to the Red Sox on the Bose radio in the big kitchen at an old butcher block table. You go five minutes up the street for pints to watch the Celtics. I’m not a TV guy anyway. (TV really is what’s making us sedentary and fat. It’s not Facebook or texting. We spend way more time watching TV than we do anything else. Way more. Like 50 hours a week. The culture is blindly in denial about this.)

I have resisted nosing through all his bookshelves and stacks this trip. I’m obsessed with the book I brought with me. It’s a paperback copy of  The Snow Leopard by Peter Matthiessen. It was written in 1978. It won the National Book Award for non-fiction that year. I’ve seen it hundreds of times. What made me finally buy it, who knows. One of life’s wonderful mysteries, why we choose, or get chosen, and when. Maybe because a childhood friend from my rural hometown recently asked if I’d like to go hiking with him. Or maybe because I have three granddaughters who live right near the Tetons in Wyoming. Or maybe because I have found myself for years dipping into books about Buddhism. Maybe that’s why this book, now. It’s about all that stuff. And it’s filled with such a trove of details, as piled with observations and free thoughts as this wonderful house is piled with words and thoughts and imagery. It’s currently the best book I’ve ever read. I found myself thinking that I could rid my own shelves of all the books I have and just read and re-read this one. If that sounds crazy, well, then it is. ’If I’m out of my mind, it’s all right with me, thought Moses Herzog’ (the opening line of Saul Bellow’s Herzog, maybe the one book I would leave on my shelves, if I had to leave one).

The Snow Leopard is something I need. Like I need this house without a TV. 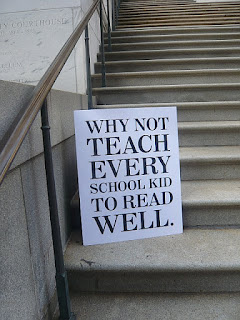 My sign is quiet. It’s quieter than I am. When someone stops and talks to me about my sign, I want to say I’m the wrong guy to talk to. I’m filled with all the political noise that’s swirling out there. There’s too much noise about kids and schools right now. It’s almost all political. No one wants a solution because no one wants to stop fighting about it. That’s why I don’t want to talk about it on the sidewalk. I don’t want to argue. They do. I want to hold the sign that wrote itself; it even chose the period, and not a question mark. I just want to hold it. It isn’t an argument. It isn’t an ‘Occupy’ sign. Some guy from the Dept. of Ed. asked me the other day if I was with the Occupy group. He’s seen me hundreds of times. I wonder why he asked me that day. I’ve been holding the sign since September. Just holding it. No attitude. I’m just a sign-holder. I’m as much a loner as I look like standing there. I’m not going to join any group. No group has taught the kids to read. They’ve all had their chances. The sign isn’t partisan that way. It blames us all. It blames New York especially, New York with all its self-proclaimed progressive traditions. The sign just wants every school kid to learn to read well.

On one of the early pages in The Snow Leopard, Peter Matthiessen writes that, ‘Ecstasy is identity with all existence.’ That’s how I feel when the sign is in front of me. That’s how I feel when someone looks/smiles/comments on the sign’s message as they walk by it. Sometimes when I can see that no one is approaching me, and won’t be, from either direction, for maybe 30 seconds, I’ll look at the sign myself. I’ll read it. I didn’t write it anymore than you did. I’m moved by it. I think it’ll change the world. I think things like maybe the kid who was killed in Tampa wouldn’t have been killed if every school kid would have been taught to read well. Young black males wouldn’t be seen as they’re seen. ‘Young black males’ wouldn’t be a category like it is now. See what I mean? That’s what I think when I read the sign. That might seem crazy to you, but it’s not.

So I sit here by a river and an ocean near Boston where folks have Red Sox decals and bumper stickers everywhere, and tattoos no doubt on places you’ll never see. I like Boston stuff. A Catholic kid in rural western New York State, I liked the Celtics before I liked the Yankees or Notre Dame. I like getting the Globe with my Times when I’m up here. I like their sports talk on the radio. Rondo is my favorite player. But I wish I were going to be back holding my sign tomorrow. Instead I have to hang here till mid-week.

I’ll read more of my book. I read it slowly.

Posted by Bill Gunlocke, a city reader at 9:21 AM No comments: 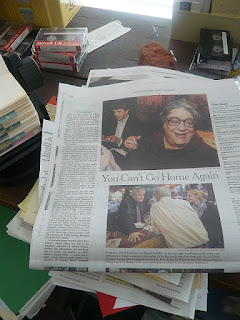 The Best Part of Waking Up

The morning paper has textures no computer can give you

I go to the corner between 5:30 and 6:00 in the morning to get the Times. My parents were early birds, now I am. I could get it delivered to my door and it’d be there that early, but I like to go out for it. I like the atmosphere of the city not quite ready for you.

A few mornings, the paper’s not there when I go. Trucks were delayed I guess. I get my coffee and go home. Those mornings I’ll read it online. (I’m not a Times subscriber so I only get a few days I can do that.) It doesn’t do it for me. It’s a hurry-up experience. The format and the videos and photo galleries and the archives, it makes you read differently. I don’t want to read differently.

I love a newspaper. I’m writing this near Boston where I am at a friend’s for a week. His house is a block and a half from a place you can get Dunkin’ Donuts coffee and the Times and the Boston Globe. You can’t improve on that, and they haven’t.

Posted by Bill Gunlocke, a city reader at 9:14 AM No comments: 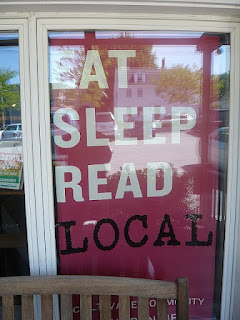 One of Life’s Big Treats

Shopping at your local bookstore

It’s an easy and quiet trip to order a book from Amazon late at night. You’re reading Moby Dick and it’s so good you want more Melville in your life, because that’s the way we are. You go right to Amazon and you order Billy Budd. No notes on index cards needed to remind you to get it at your local bookstore. Back to reading Moby Dick, more Melville on the way.

That’s efficient fun. No doubt. But deeper fun can be had by going to your favorite bookshop. Get your Melville there.

I don’t know what to say about e-books. They look so thin and colorless to me when I see someone reading one on the subway that I have nothing to say about them, except they look not at all interesting, while real books look so interesting, I’ll buy ones I may never even read.

Go to your local bookstore. They’ve got smart people in them and good-looking books you’ll want to buy.

Posted by Bill Gunlocke, a city reader at 9:11 AM No comments: 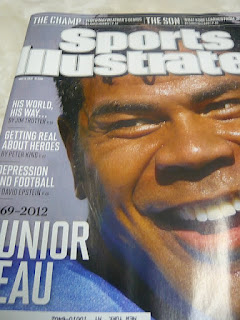 Give kids a magazine like this. Get them a subscription.
Posted by Bill Gunlocke, a city reader at 9:07 AM No comments: