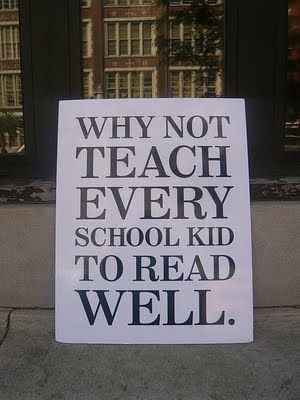 ‘Stick To Your Guns!’ the guy said to me

The message really matters to some people, so I stand tall with it.


I can tell by some of the comments people make when they see my sign that they feel like I do. I can also see it in their eyes. I can also now see it in the faces of some of the people who pass me on their way into work at the Dept. of Ed. building I stand in front of with the sign. At first none of those people going in the building knew how to react to me. They didn’t know me. They still don’t really, though I’ve given a few of them a copy of this newsletter. I may have looked like an opponent of some kind. Somebody trashing the work they do. Now they smile more; give me a look that says they agree with the sign.

I liked it when the guy blurted out as he walked by, ‘Stick To Your Guns!’. He was an older guy. That’s an old-guy expression. It was good to hear. Like it was coming from my late-father who I sometimes conjure to reinforce my determination. You wonder as you stand there sometimes what you’re doing, what you hope to accomplish. What can one guy do. Frequently when there’s a lull in the stream of people walking by, I turn the sign toward me and read it. The simplicity of it comforts me and charges me up. I turn it back toward the street, and make sure to stand tall. I know how to stand tall, because I’m imitating someone who stood tall in my eyes.

Sit with me on my couch in 1972 in Lakewood, Ohio. I lived there because I moved to Cleveland after college three years earlier to teach in an inner-city Catholic grade school. I needed a teaching job as a deferment from the draft which would have sent me to Vietnam where I didn’t want to go, especially since when I graduated in 1969 in South Bend, Indiana, I was married with a week-old daughter. So I jumped at the teaching opportunity. A lot of guys jumped at teaching jobs then. Anyway I’m on my couch. I can see myself sitting there looking at the college alumni magazine in front of a big window on the second-floor half of a double house we were renting.

There’s a small article up front in the magazine with a picture of a student. There’s something about the guy I’m drawn to. The way he’s standing, I guess. The way he looks. The solitariness of him. He looks like a guy with a sincere purpose. So I fold the magazine back, probably light a cigarette, and read about this guy. His name is Al. He is a student. He’s quiet-looking. Like maybe he’s a swimmer. Thinning blonde hair. White t shirt. White levis, as we called them then. He’s holding a large juice can in front of his chest. The article says he holds this can every day in front of both dining halls during the lunch and dinner hour. There may have been a sign on the can; I can’t recall. But what he’s got the can for is to collect money for Bangladesh, which at the time was going through political and environmental disasters. It was famous then like Haiti or Sudan are now. This guy Al was moved to find a can and use it to help people who 40 years ago seemed much further away than they seem now.

You wouldn’t think that effort of his would seem so important to me. The ‘60s had just ended. Bolder gestures had been made over all sorts of issues of war and peace and poverty. Students had danced, and worn war paint and flowers in their hair, and burned draft cards and hung images of national leaders. Music was involved, drugs were too. Cops got involved. Tear gas sometimes. After all that, what was it about Al that grabbed me as being so radical?

Probably the simplicity of it. The persistence of it. The obviousness of it. The Quaker look of it on a Catholic campus. The way he stood there. By himself. Who knows why we’re drawn to things? All I know is that for 40 years Al has seemed like the way to be. Like Pat Tillman might seem the way to a younger generation.

So I’m there with my sign last week and a guy maybe in his 50s, a white guy in a tie, slows down and says something like, Ain’t that the truth! I look at him and smile. Al probably would have been more stoic. But I smile, and the guy starts telling me he was once in prison, and he was amazed how many of the other prisoners came to him to have him write letters for them. Oh my, I thought, there’s one more example of how not teaching people to read affects their lives. Think about that. Guys in jail came to this guy to have him write letters for them. Not term papers. Not letters to their lawyer. But just plain letters home. By law a young person has to stay in school until they’re 16. So, these guys in jail had been in school from kindergarten or first grade through 10th grade, at least; and could not write well enough to write a letter home. Of course, this is not news, prisoners asking someone else to pen a letter for them. We’ve seen it in movies, and it’s a good scene usually. But I think it’s a scenario that a college professor teaching elementary education prospects could put up on the blackboard at the beginning of the semester and it could be analyzed the whole marking period. How could someone go to public school for 10 years and not know how to read well enough to be able to write well enough to write a basic letter?

If the topic were discussed long enough, some student might say, I wonder if the fact that these men couldn’t read well contributed to the life that landed them in jail. Eureka moment! There you are. That is of course a contributing factor. Imagine being an adult without the skill to write a letter home. That means no emailing either. That means no participating in the common world. How can schools not see that to pass these students on before they can read as well as they should at that grade level is doing a terrible disservice to the kids and their neighborhood and the family they might start some day.

The sign doesn’t say all that. But it implies it. And sometimes people who have to squint and stare a long time to read it, sometimes they’ll say, That’s right, or they’ll just smile sadly as they walk on by.
Posted by Bill Gunlocke, a city reader at 2:37 AM No comments: 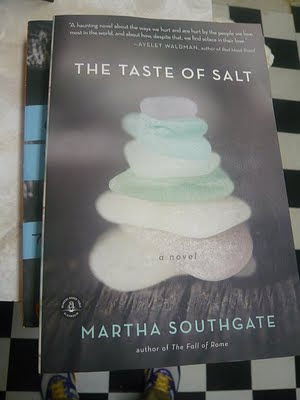 Of course I’m excited about this book. Martha Southgate and I worked together 25 years ago on a weekly paper I started in Cleveland. She was interested so much in writing and the arts, she was destined to move here. She’s been here quite a while now. This is her fourth novel. The first three got good praise. The first one won the Coretta Scott King award.

This one’s got Cleveland in it, and it’s got Woods Hole in it, a world away from Lake Erie’s shores. It’s about a woman from a black family with classic books on the shelves. It’s about alcohol and the distance it imposes. it’s about other ways we distance ourselves, too. It’s about the reasons. We read books to see what the reasons might be for how we are. Here’s a graceful, fearless attempt to show us some reasons.
Posted by Bill Gunlocke, a city reader at 2:33 AM No comments: 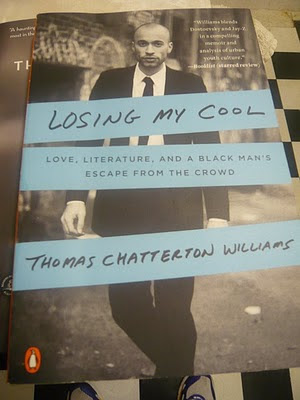 Thomas Chatterton Williams grew up in the white part of town. In New Jersey. You understand how he is drawn to the black culture he sees in the hip-hop images on the TV in the black barbershop he is driven to every couple weeks. You’re stirred along with him when he finds that new, proud part of his life to identify with. You recognize why he wants to. Part of you wants to too. That’s part of why you’re reading the book.

But he’s not all that. And it doesn’t accommodate all of him. He’s his parents’ kid. Intellectual aspirations are as much a part of him as his basketball and his music. Just hearing that, you can tell it’s a good story. And it’s told well. Williams is lean and truthful. Just like he looks.
Adults and high-school kids will like it. Nothing not to like.
Posted by Bill Gunlocke, a city reader at 2:23 AM No comments: 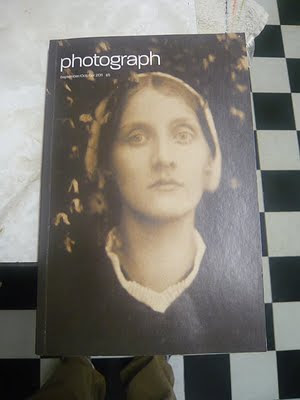 This beautiful six-times-a-year magazine talks about the best photographs in New York’s galleries and museums. Its site is photographmag.com. But get the hard copy.
Posted by Bill Gunlocke, a city reader at 2:22 AM No comments: