'The ultimate obscenity is not caring, not doing something about what you feel, not feeling! Just drawing back and drawing in, becoming narcissistic.'
― Rod Serling

Posted by Bill Gunlocke, a city reader at 9:22 AM No comments: 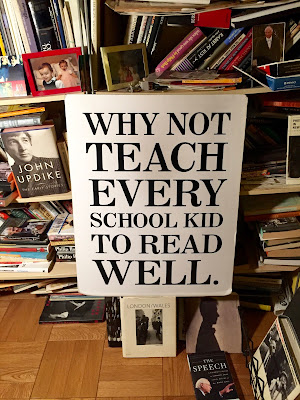 I've told myself I should just point at the sign when people ask me what I'm there for. They only stop for a minute. There's no time to say anything really that will satisfy them. People are competitive. They stop to win. They want to best me and the sign with their own take on things. Most people don't stop. The sign's message is clear. Most people smile with their eyes when they read it. Some people who pass the sign every day, smile every day. Some cars that go by beep every day. Peace sign or thumb-up thrust out the window.


“Toni’s the biggest person I’ve ever known, by far. She has the greatest generosity of anyone I’ve ever known. So it’s not only her intelligence, which is extreme… I truthfully know other people as smart as Toni, but I do not know anyone who is so large in generosity. And her talent is fantastic, but I know other very talented people. She is unique. I feel like I’ve met a zillion people, so I don’t think she’s unique in my life — she is unique on the planet.”
Posted by Bill Gunlocke, a city reader at 10:35 AM No comments: