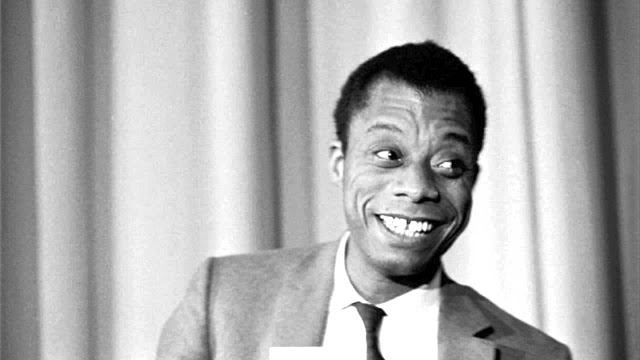 'The paradox of education is precisely this - that as one begins to become conscious one begins to examine the society in which he is being educated.'        -James A. Baldwin

Posted by Bill Gunlocke, a city reader at 3:03 AM No comments: 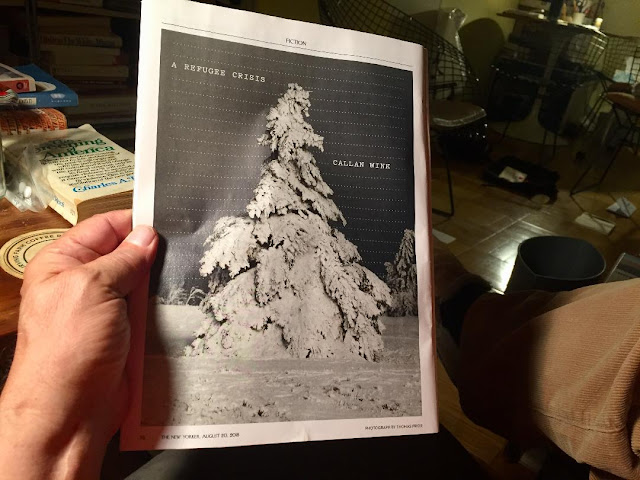 I don’t have a television. But my friend in Florida lets me stream his Comcast offerings. It has all the channels and then some. I don’t do much with it. I’ll watch Anderson Cooper, sometimes Don Lemon. PBS NewsHour with Judy Woodruff. I watched the Showtime four-part series on the New York Times, ‘The Fourth Estate,’ three times. I surf around YouTube. Last night I didn’t watch anything after the NewsHour. I read the latest New Yorker. There’s a short story in it called ‘A Refugee Crisis’ by Callan Wink. I read a book of his stories a year ago. He's young and lives in Montana and works as a fishing guide. I don’t fish or live like he does or his characters do. But his stories are wonderful to me. There’s no show on my laptop TV that would be anything like them.


Posted by Bill Gunlocke, a city reader at 3:23 AM No comments: 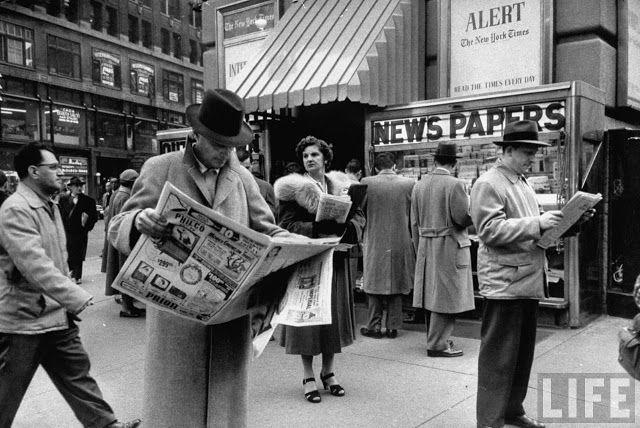 (This was in the Times today. It’s one of hundreds of papers’ comments about the value of America’s free press.):

‘Mr. Trump’s behavior has placed the American experiment in democracy in unprecedentedly perilous times, and a free press has become more central to our nation's survival than ever.'

Newspapers from New York to North Dakota have agreed to publish editorials on Thursday in response to the president’s anti-press rhetoric.CreditEvan Vucci/Associated Press

The call to arms came in the form of a memo.

Marjorie Pritchard, the deputy managing editor of The Boston Globe, reached out to editorial boards at other newspapers last week.

“We propose to publish an editorial on August 16 on the dangers of the administration’s assault on the press and ask others to commit to publishing their own editorials on the same date,” the memo said.

As of Tuesday, more than 200 newspapers, including The New York Times, had signed on.

The Globe’s effort to rally editorial writers across the country came in reaction to the president’s stepped-up attacks on the media.

At a recent rally in Pennsylvania, Mr. Trump pointed to the group of journalists covering the event, saying they “only make up stories” and called them “fake, fake disgusting news.” On Twitter, he has revived an old phrase — “the enemy of the people” — to describe “much of the media” and “the Fake News Media.”

Last month, at a news conference in Britain, he refused to call on the CNN White House correspondent Jim Acosta, saying, “CNN is fake news. I don’t take questions from CNN.” A week later, the White House barred another CNN reporter, Kaitlan Collins, from attending a public appearance by President Trump in the White House Rose Garden, after she had called out questions during a photo opportunity earlier in the day.

“We’re not the enemy of the people,” Ms. Pritchard, who oversees The Globe’s opinion section, said in an interview. “We thought that a coordinated effort across the country would make a powerful statement about the importance of a free press.”

The newspapers participating in the effort include large-circulation dailies like The Houston Chronicle and The Miami Herald, as well as smaller publications like The Oakridger in Oak Ridge, Tenn., and The Griggs County Courier and Steele County Press in North Dakota.

Each newspaper will prepare its own editorial to be published Thursday.

James Bennet, the editorial page editor of The Times, cited the public stance of the newspaper’s publisher, A. G. Sulzberger, in laying out the reason for the newspaper’s participation in the initiative. “Our publisher has put a stake in the ground on this issue, and at a time when newspapers around the country are under real commercial and political pressure, we think it’s important to show solidarity,” Mr. Bennet said.

Last month, Mr. Trump and Mr. Sulzberger met for an off-the-record discussion at the White House on July 20. The president made the meeting public in a Twitter post more than a week later, saying they had discussed “the vast amounts of Fake News being put out by the media.” Mr. Sulzberger responded in a statement, saying that he found Mr. Trump’s language “not just divisive but increasingly dangerous.”

The Radio Television Digital News Association has joined The Globe in promoting the effort, encouraging TV and radio stations to release editorials on their websites or on the air.

“I hope that what we’re doing with broadcast and digital journalists will be able to amplify their efforts and to call attention to the fact that we’re not fake news, we’re not the enemy of the people and here are the things we do every day by covering the news,” said Dan Shelley, the association’s executive director.

Ms. Pritchard said she hoped that the editorials would bring attention to how the president’s rhetoric has affected the body politic.

“We’re being portrayed as a domestic enemy rather than a loyal fellow countryman whose profession is to hold the powerful accountable,” she said. “This whole project is not anti-Trump. It’s really pro-press.”
. 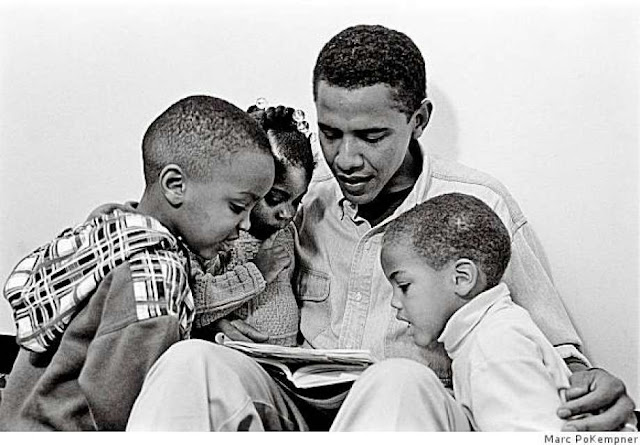 Posted by Bill Gunlocke, a city reader at 3:25 AM No comments: 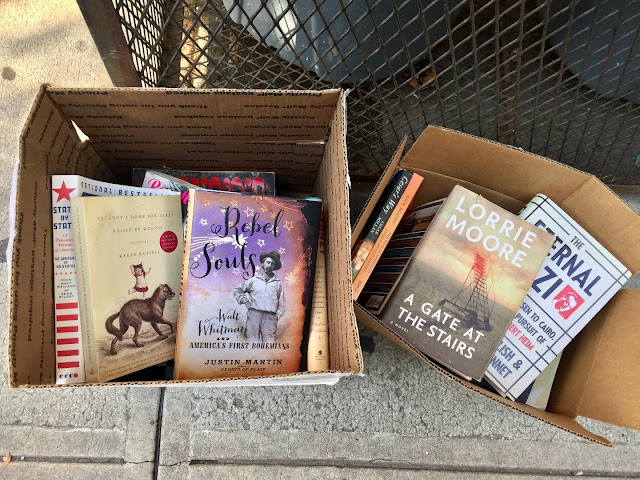 On my daily long walk, yesterday on 7th Street in the East Village there were these boxes of books for anyone.

Posted by Bill Gunlocke, a city reader at 3:41 AM No comments: 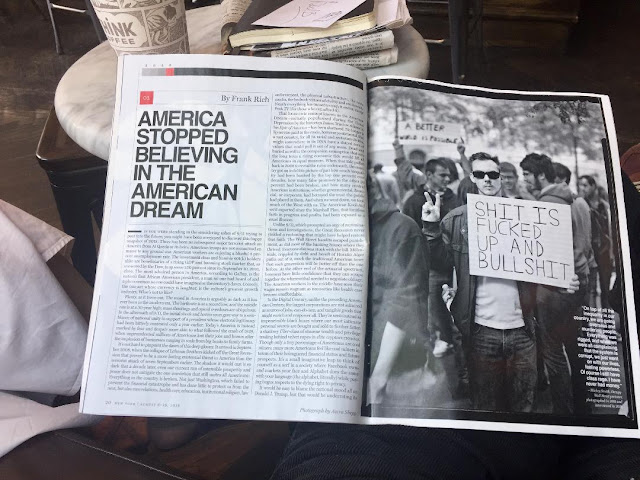 Magazines still come in the mail. Even if more people look at them online during the week or the month. There’s new content being put up on their sites all the time. Hard to keep up. You really can’t keep up, which is one of the causes of our anxious culture. Magazines in the mail can calm that a bit. They have a start and a finish. You can complete one and you can see by the way the pages have wrinkled and softened that you’ve done something. The most recent New York Magazine is good from start to finish. The excellence of the cover story on the lasting effects of the crash of 2008 by Frank Rich is why you read magazines in the first place. Look for it at the newsstand, or the library. Or on their--I have to admit--irresistible, if way too much to absorb it all website.

Posted by Bill Gunlocke, a city reader at 3:20 AM No comments: