That Was Then, This Is Now

The first cityReader could have been written today 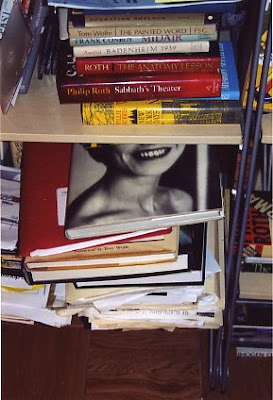 (I wrote this more than four years ago. I rerun it once a year.)

Before you move here from Ohio, you have this image of New York City as a bookish place. The photograph of the famous writers gathered at the Gotham Book Mart. The New Yorker. Random House. Esquire. The Strand. Susan Sontag. The Reading Room at the big library. Simon & Schuster. Farrar, Straus & Giroux. Columbia. NYU. James Baldwin. The New School. Woody Allen. The New York Times Book Review. Vintage paperbacks. John Cheever. The New York Review of Books. J.D. Salinger. The Paris Review. The Algonquin. The Partisan Review. Delmore Schwartz. You even see it call itself Book Country in ads for some kind of book fest. It would be your kind of place, you believe.

Then, about the time you’re moving here almost 15 years ago, you see a photo on the front page of the Times as you’re skimming the headlines before you sit down to read the whole paper, and you think, oh, that must be a picture from some place like Harlan County, Kentucky about some hardscrabble issue, one of those features the Times does now and then about some place remote from New York and its refinement. But when you’re in your seat on the couch and you look closer you’re shocked to see that it’s not Kentucky at all but a picture of one of the ball fields in New York City where the public high school teams play their games. There are other pictures inside of other sorry-looking fields. You’re not so naïve to think the public school fields would be like a suburban school’s fields, but you can’t believe that they’re that bad and you feel like a fool for being so unaware and you get angry at New York for not being a good person if that’s how it lets its playing fields for its kids go. You hope your friends don’t see the article.

But you move to Manhattan as planned and the condition of playing fields doesn’t come up much. Anyone you knew from college who lived here has moved to the suburbs, for reasons like playing fields for their kids. You do read, maybe prompted by that article, that some mogul(s) is fixing up some of the fields. That makes you feel better. You wanted more outrage from the citizenry maybe, but at least some progress is being made. What you really wish is that the Mayor would declare eminent domain and seize all sorts of parking lots and raze under-used buildings and put in rich, green, playing fields throughout the city. He could even take too-exclusive and over-blown Gramercy Park up the street from where you live and turn it into a hockey rink. You very much wish for spaces for kids here. You’re surprised no one else brings it up ever.

But that’s not really about the New York bookishness that drew you here. That’s only a first instance of how you are disabused of some of your New York illusions. Those nasty playing fields would be as nothing compared to what really starts bugging you, and what bugs you still about the city. But maybe those playing fields will come in handy as a metaphor. You’ve come to see too many of the public schools in this bookish city as just as hardscrabble and under-watered and un-tended-to as those awful-looking fields. You aren’t talking about the physical plants of the schools, though they usually look pretty uninviting. No, you are talking about the reading life of the kids in so many of those big schools.

In the neighborhood you live in now, you can stand, on a holiday, when traffic is light, in the center of the intersection in front of your apartment building, and you can see five bodegas of varying quality, two of them selling flowers. Three dry cleaners, one with washers and dryers. A newsstand with a busy lottery machine, an internet café. There’s an off-brand grocery store, a couple nail salons, two liquor stores, a CVS, a Starbucks, a Dunkin’ Donuts, two good bagel places, one pizza place (you refuse to count the one that sells a-shot-and-a-slice). Maybe a dozen restaurants, and almost that many popular bars. It’s a great neighborhood, with, hey, that exclusive park-with-a key just a short block away. It has all you wanted when you moved here. Except it doesn’t have a bookstore. The newsstand will sell you fashion magazines from Milan, muscle magazines, college hoops mags. But there’s no bookstore in sight. You can walk to Union Square to the vibrant, four-floored Barnes & Noble and you do that. And Strand is not far beyond that. But you wanted your neighborhood to have its own bookstore, a small one like where one of the bodegas is.

You know you have no real reason to complain about what your immediate neighborhood lacks when you compare it to the parts of the city where those ball fields are. There aren’t really any bookstores out there. You think of that promo that said New York is Book Country. Just parts of it, they must have meant.

There’s another metaphor you use when you’re having a pint with friends and you steer the conversation your way and you start going on about kids and reading and the poor results poor kids get in reading tests. You say that in a small island culture where everyone lives near the shore, swimming would be the most important skill that would be needed to be taught to kids so they’d survive, so they wouldn’t drown. They wouldn’t teach soccer or traditional dance steps until every child knew how to swim. When you see that your friends accept that as obvious, you bring up New York City’s schools. You say that in order to survive in this culture you have to know how to read, more than you need to know how to sing or shoot hoops or play volleyball or know who dug the Erie Canal. You have to know how to read before anything else. In order to survive really. In order not to drown.

Mayor Bloomberg, in his treasure chest campaign, so touted the success he claims he’s 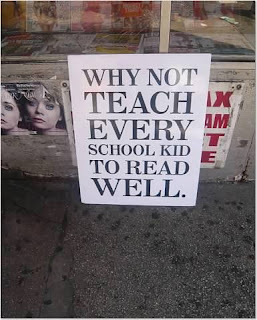 achieved in the schools since he took them over, you thought he was maybe going to buy an aircraft carrier and fly onto it and claim the learning war was over. You get mad thinking that he would have been cheered.

Don’t they see, kids are drowning still. So many of them can’t read well enough to pass their swimming test. And you know that many of the kids who pass are really only dog-paddling. Why does the Mayor who fastidiously saw to it that 100% of the bars complied with his no-smoking edict, why does he not demand that 100% of the city’s kids know how to read? In Cleveland, where you came from 15 years ago, there’s a plaque on the front of the big library that says: Kids Who Read Succeed. Hell, maybe Cleveland is Book Country.

If the Mayor can up-end centuries of tradition and outlaw tobacco from public houses, why can’t he buck Albany and the Board of Regents and turn the city’s schools into reading academies where kids will immerse themselves in books and magazines, and the state syllabus be damned. It isn’t longer hours at school the kids need, it is focused hours. It is reading time. Time to make up for what they lacked in their earliest years. The city has them for 12 years. That’s a long time. Enough time to teach every kid to read well.

Posted by Bill Gunlocke, a city reader at 8:07 AM No comments:


Life Goes to the Movies 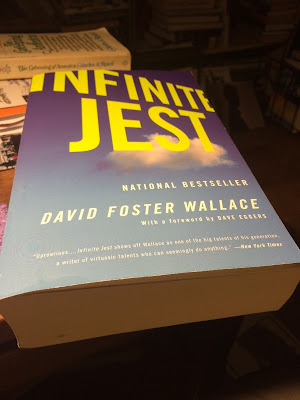 I’m not one for biopics. I didn’t even see the Johnny Cash one with Joaquin Phoenix, even though I’ve sometimes told people I did, so they wouldn’t scratch their heads or try to convince me what I missed. I didn’t see the James Brown one, or Brian Wilson. You couldn’t strap me down and make me watch Kevin Spacey be Bobby Darin.

But I overcame things and went to see The End of the Tour on the morning of its second day at the Angelika. The trailer I’d seen at the Woody Allen movie sold me on Jason Segel as David Foster Wallace. I didn’t need to be sold on Jesse Eisenberg.  Don’t miss their performances. I pulled Infinite Jest off the shelf when I got home. I never quite finished it. Even though I thought it was fantastic.
Posted by Bill Gunlocke, a city reader at 7:59 AM No comments:


A Writer’s Letter to His Son 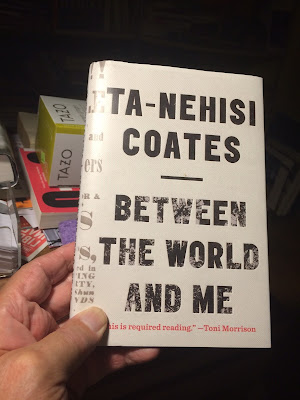 It’s also addressed to us

‘My reclamation would be accomplished, like Malcolm’s, through books, through my own study and exploration. Perhaps I might write something of consequence someday. I had been reading and writing beyond the purview of the schools all my life. Already I was scribbling down bad rap lyrics and bad poetry. The air of that time was charged with the call for a return, to old things, to something essential, some part of us that had been left behind in the mad dash out of the past and into America.’
Posted by Bill Gunlocke, a city reader at 7:56 AM No comments: 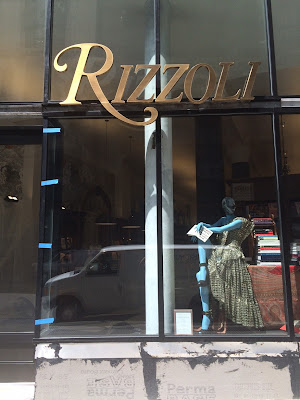 New Rizzoli bookstore on Broadway and 26th Street.  I popped in when they were just opening. It’ll be a good space.
Posted by Bill Gunlocke, a city reader at 7:53 AM No comments: