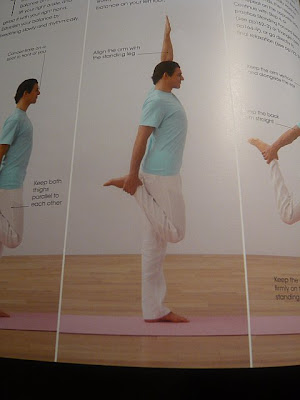 Or thoughts I had about reading while standing on one leg
It’s not unusual for me to waver. About most things my mind can be changed by a forceful argument and then changed back again by a strong counter-argument. It’s how the life of the mind is. Last week I read the Times hesitant review of the new production of Death of a Salesman and thought, Oh, I can skip that. Then yesterday I read glowing reviews of it in New York Magazine and The New Yorker, and now I regret that I didn’t get a ticket. I go back and forth about Melo. Just like I used to about Jeremy Shockey. Like I do about Mike Bloomberg. And Charlie Rose. And Bill Moyers. I’m not even sure how I think about that guy Mike Daisey who played loose with the facts on This American Life about the Chinese factories where iPhones are made. It’s exhausting to be human and to try to keep up with the many variables that go into forming a steady opinion of something.

So, it’s a solid feeling for me to have such an unwavering belief in the necessity of the schools teaching every school kid to read well. I never waver on that. There is no counter-argument that moves me off that certainty. To me, it’s the linchpin, the centerpiece, the core, the raison d’etre of schooling. There’s almost nothing else schools should be concerned with. For the city not to see it that way exhausts me, but there’s no re-considering on my part.

I read the local papers, I listen to local NPR, I check out a couple of school-stuff blogs. To my mind, they all miss the point. Their coverage is all about school closings and the pros and cons of charters. Or about testing, which they’ve feverishly elevated to the level of water-boarding. It drives me nuts that they get so caught up in discussions that don’t at all advance the needs of teaching kids to read well. The writers and talk show hosts and guests want to talk about the politics of it, rather than the kids of it.

Maybe reading well is too simple for those discussions. Someone once said that golf is the perfect hobby because there are so many things to discuss about it: new equipment, new balls that fly farther, different kinds of courses, new instructional aids. Look at all the golf magazines there are. There’s even a golf channel. Swimming is just about the opposite of that. All you need is a Speedo and some goggles. Not much to write about pools; they’re all virtually the same. Maybe reading is like that. There’s just not that much to talk about. Newspapers and TV and radio find it more energizing to discuss the controversies of charter schools and teacher ratings. It’s more like golf.

Now that I’ve mentioned golf, I’ll tell you I don’t play golf. I used to when I was in grade school. A couple friends and I got caught up in it in the early years of Arnold Palmer’s hard-charging career. There was no course in the small rural western New York town I grew up in. We’d have to get a ride to the next town over, where there was a nine-hole course that got so dry in summer we’d have to pound our tees in with the head of our drivers. It was great fun. We’d pretend we were Arnie. We were always thinking golf those few summers we played. We hit wiffle golf balls in our backyards. We practiced our swings in mirrors. We putted into drinking glasses on carpets in our bedrooms. The more we practiced the better we got.

Just like the more we practiced baseball or basketball, the better we got. We were Catholic boys and sports were what we did. We learned to read for a lifetime from reading the sports page and the backs of baseball cards and whatever sports books or magazines we could find in the local cigar store or the cozy little library up the street from the Atlantic gas station where we bought candy bars and bottles of pop and where a Yankee game would often be on the radio.
Now that gas station is closed, the old library has been replaced, my parents are long dead, and the big house where I putted on the carpet and shot hoops on the driveway is a funeral home. My golfing buddies, like me, are now retired or about to be, and impossible as it is, we’ll all be 65 by summer’s end.

So with no golf in my life, I’ve been exercising, like a suddenly-old guy, by walking and swimming. And some months ago I started going to yoga classes just up the street. My old once-Catholic buddies would probably laugh into their beers about that. But I have a mat in my cluttered apartment and I get on it every morning. And I’ve learned (re-learned, actually) something from it that reinforces what I know needs to happen to have every school kid learn to read well.

Here’s what I’ve found. At 64, you’ve lost the easy balance you had when you were young. There was a time when, like you see in basketball games on TV, if your sneaker came off, you could stand on one leg and put the shoe back on the other foot. No time-out required. You’d squeeze the shoe on and run right back into the action. Not so at 64. Yoga showed me that glaringly. No matter that I could do the basic poses with not much effort, the standing on one leg while pulling the other leg up and behind, was a shaky thing to say the least, and I quickly lost my balance. The younger people (they were all younger) in the class did it effortlessly. The instructor suggested I balance myself against the wall with my free arm. I was mortified. There I was, a sports guy among Tazo tea drinkers, holding myself up with one hand on the wall while they balanced in space.

I was like a slow-learner, a poor reader, in a class of smarties. It went on that way the few week

of the introductory lessons. My pride was wounded. My ego was upended. I wondered if I’d ever get my balance and be able to stand with no support.

Months have passed since then and my almost-daily practice at home has taken me to the point where I can stand easily on one leg. Which goes to show that practice, getting enough reps, does the trick. It always does.

It, of course, would work with kids and reading that way too. Shaky readers, given enough time and reps, could learn to read. No matter their background, no matter the address of the school or its past failures, no matter their color, given enough reps, they’d learn to read well. When I started doing yoga, I was basically out of my element, the world of floor mats and Tibetan music and wall hangings of deities with eight arms was a foreign, intimidating environment to me. Just like the world of books might be to poor kids from non-reading backgrounds. But if a thinning-haired, beer-drinking, irascible, 64-year-old baby boomer can learn to stand in the middle of the living room on one leg, just from getting enough practice reps in, then every school kid in New York City can learn to read well.

Namaste.
Posted by Bill Gunlocke, a city reader at 6:48 AM No comments: 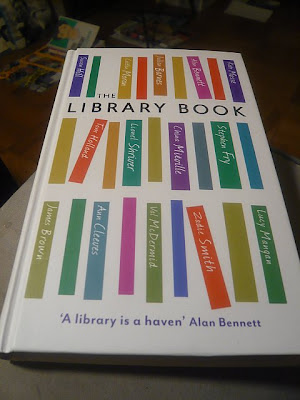 I read this book on the #6 train over two or three weeks. An entry going downtown. Another one on the way home. I could have taken the speedier express trains but the #6 allows for more reading time. (I’ll bet more people than I choose slow trains for that reason.)
The book is a collection of twenty-some essays and memoirs by current British writers about their library experiences. Each piece is short. The book itself is only 175 pages. You can’t each just one. I was engrossed in all of them.
The B

ritish system is cash-strapped like ours is. The writers in this collection remind us of the wonders of a library.
On St. Patrick’s Day, after watching a bit of the parade, my oldest daughter and I took her 3 ½ year old twins into her hew-neighborhood library and got them each their own card. Little New Yorkers with their new NYPL cards in their little hands. Lion cubs.
Posted by Bill Gunlocke, a city reader at 6:41 AM No comments: 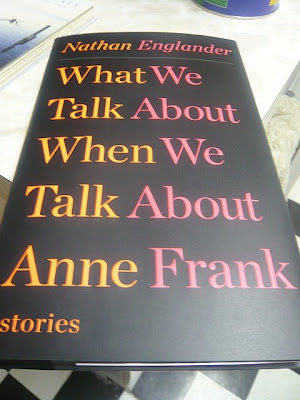 I’ve come to like short stories better than novels. The good ones are tight, focused, nothing extraneous. No clumsy transitions, no padding, no pages you want to skip like you do in too many novels because they aren’t as good as the early, promising pages.
Ann Beattie. Frank O’Connor. Updike. Joyce. Flannery O’Connor. Bernard Malamud. Hemingway. J.D.Salinger. John Cheever. Those are my favorites. Now I’ll add Nathan Englander.
I recently read Englander’s second collection, [ital]What We talk About When We Talk About Anne Frank[ital]. If you’re a short story reader, you know the feeling of finishing a great story and putting the book down and staring at the air in the room, or holding the book up and staring at it. You’re totally satisfied and you’re totally stimulated at the same time. That’s how I felt after each of the eight stories in the book. If you like short stories, don’t even wait for the paperback. Go to a store and get a copy.
Posted by Bill Gunlocke, a city reader at 6:37 AM No comments: 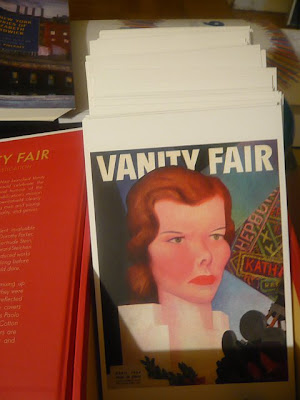 Box of classic Vanity Fair postcards. I found them in a bookstore in Brooklyn.
Posted by Bill Gunlocke, a city reader at 3:16 AM No comments: