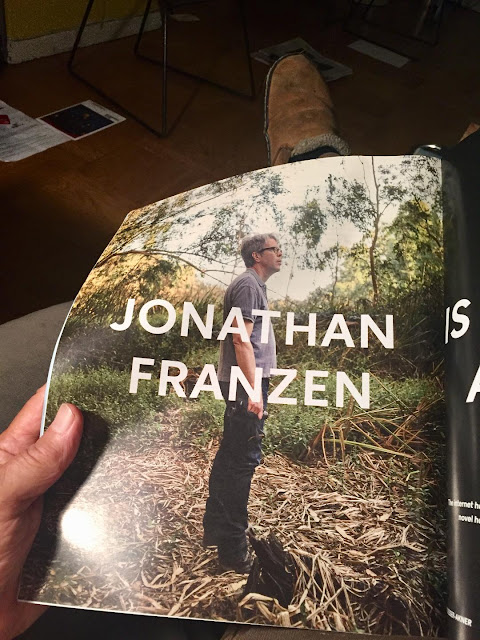 Saturday’s Times if you get yours delivered comes with some Sunday ingredients. The book review and the magazine they give you a day early. The magazine today has an article on novelist Jonathan Franzen. That’s a perfect thing to read for a bookstore haunter like me. It’s a treat to find a revealing article about someone in a field you’re into. That’s one of the big pleasures of reading.

If you’re a golfer you love to read about Tiger. If you’re into theater, a piece on Glenda Jackson playing King Lear here next year excites you. There’s a bookstore near my daughter’s apartment that's just for books about cooking. People like to read about things they’re interested in. Newspapers and magazines and books are real important companions in your life that way. Without them your life would be more isolated. It’s terrible that so many kids get out of school not knowing how to read well. How will they get deeper into the things they like without reading?

Posted by Bill Gunlocke, a city reader at 5:13 AM No comments: 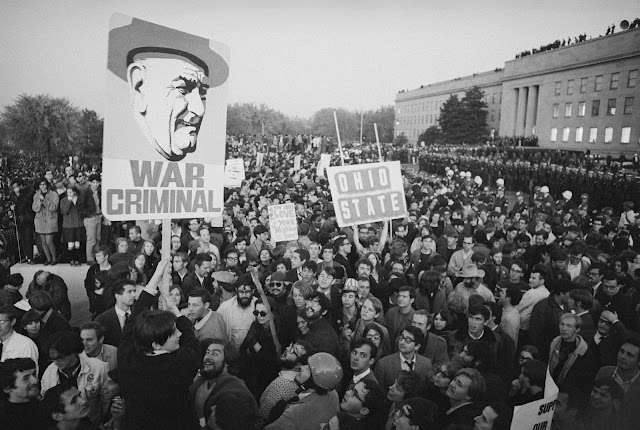 In 1967 in October 100,000 people outraged over America’s involvement and behavior in the war in Vietnam marched on the Pentagon. Norman Mailer and Dr.Spock, poet Robert Lowell, Yippies Jerry Rubin and Abbie Hoffman, and Ed Sanders and the Fugs were some of the notables who went to Washington to march in the protest. Mailer got arrested. He wrote about the march in The Armies of the Night. I’m currently reading it on the subway on the way to and from holding my sign on weekday mornings. It’s a vicarious thing, reading such a book now. You want to protest the behavior going on in today’s DC. You wonder who would be Mailer or Jerry Rubin this time. Who would be on that front line? Bernie. Naomi Klein. Cornell West. Who would the others be? Students? Emma from Parkland? Young and old should read Mailer’s book.

Sometimes people walking by the sign or riding by on a bicycle or in a passing car with the window down will flash a peace sign or raise their arm with a fist. The spirt is still there.

Books like Mailer’s are inspiration. Schools should have such books. 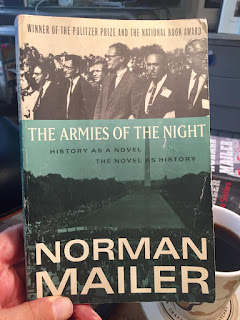 Posted by Bill Gunlocke, a city reader at 8:16 AM No comments: 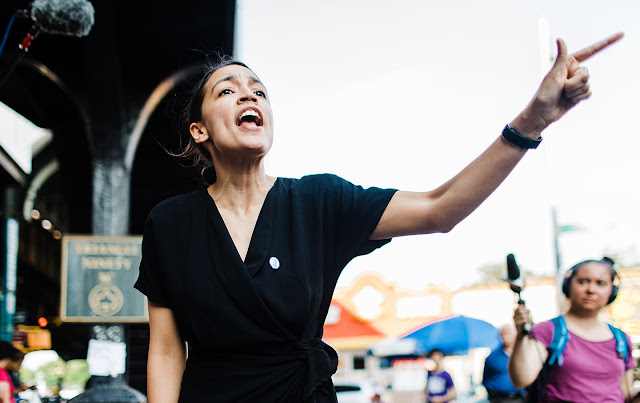 Alexandria Ocasio-Cortez.  Her primary win was the radiant good news on an otherwise grim political day.  Ben Jealous’s primary win in Maryland, that was good news too. They weren’t and aren’t standard-fare candidates. They were Bernie supporters. Two of many. When Bernie came on Bill Maher’s show a couple weeks ago, the audience got on its feet.

Reading about that movement can be a good companion now. Which is another reason you wish all young people from poor and working-class parts of the city could read well. 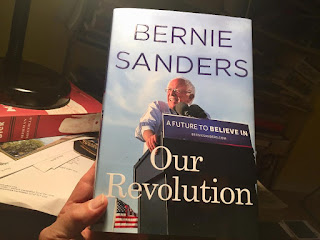 Posted by Bill Gunlocke, a city reader at 7:23 AM No comments: 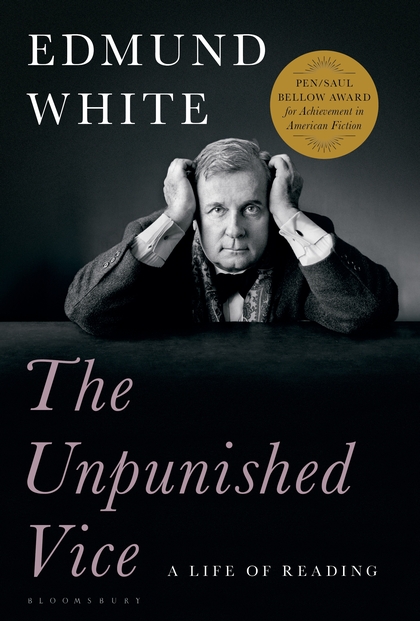 I remember toddling into my mother’s room, where she was taking a perfumed bubble bath in the late afternoon. I announced (or maybe thought), “I’m free. I can read.”
Could I really have had such an improbable thought at age six? Or have I just told myself that that thought occurred to me then? And yet I remember my mother’s sweetness, the good smell, the afternoon sunlight, and my very real feeling of joyful liberation. And, quite concretely, reading has

always struck me as a passport to the world, one in which characters are more real than actual people, where values are more intense than in the dim light of reality, where characters fly up into destinies rather than paddle around in ambiguity.
I felt like a blind person who’d just regained his sight. I was no longer a Cincinnatian but
rather an earthling. If things were clearly written in English, there was no text that was off-limits. I never read the standard children’s classics. No Wind in the Willows. Only recently did I get around to Treasure Island.
Posted by Bill Gunlocke, a city reader at 7:37 AM No comments: 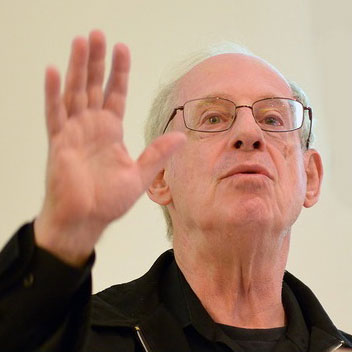 'There is massive evidence that self-selected reading, or reading what you want to read, is responsible for most of our literacy development. Readers have better reading ability, know more vocabulary, write better, spell better, and have better control of complex grammatical constructions.' -Stephen D. Krashen 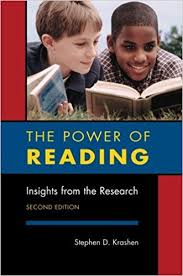 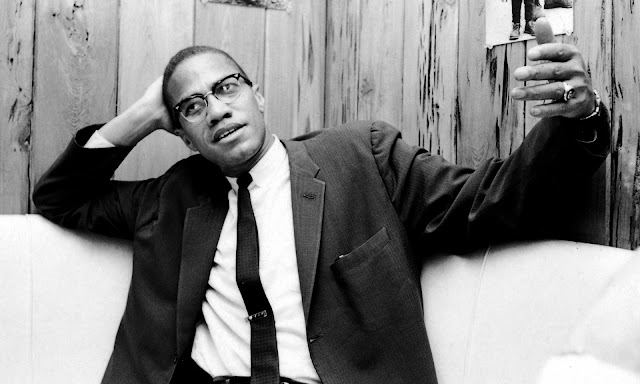 'My alma mater was books, a good library... I could spend the rest of my life reading, just satisfying my curiosity.'  -Malcolm X 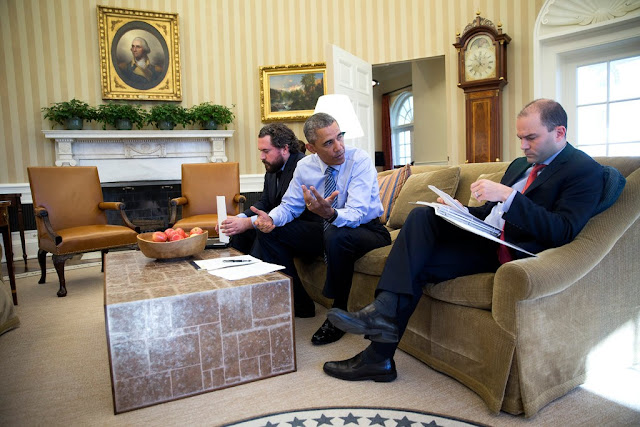 from today's New York Times, part of a review by Joe Klein of Ben Rhodes' book on the Obama White House. Rhodes was an adviser to and speechwriter for the president:

...Rhodes’s portrait of Obama is affectionate and respectful. The president is moderate, never the humanitarian firebrand that his younger staffers are — thoughtful, sane and cool. He plays cards in his spare time (spades as opposed to hearts, which was Clinton’s favorite), listens to contemporary music (“Thrift Shop,” by Macklemore), reads incessantly and muses on the things he reads (especially “Sapiens,” by Yuval Noah Harari). He is aware of his historic role as the first African-American president, but not crippled by race or embittered by it. He can be testy, but eschews anger, even in the face of the barely veiled bigotry and squalid conspiracy-mongering of his more extreme opponents. Trumpists will, no doubt, translate these qualities into aloofness, a lack of conviction and a lack of strength. But Obama’s deliberative nature led, more often than not, to the right answers — or, at the very least, to positions that did not make an explosive world more dangerous. 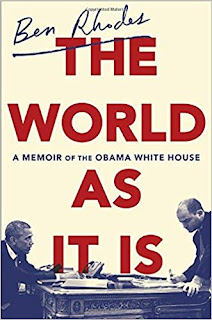 Posted by Bill Gunlocke, a city reader at 4:32 AM No comments: