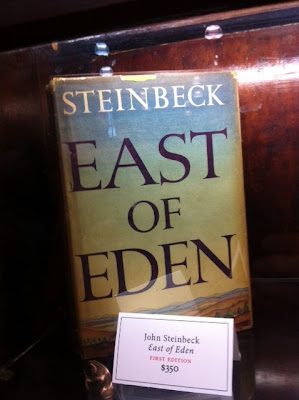 Just An Old Book To You

It may be a big deal to a collector

My father collected stamps and coins. And railroad stuff. I was a little kid sitting in the dining car once when I watched him convince a conductor to give him one of the buttons off his coat, right then and there. It’s an obsession. Obsessions are fun. Book collecting is an intense obsession.

There used to be a lot of shops and galleries where book collectors would go. A lot of it happens on the internet now. Amazon has valuable books listed.

The Steinbeck book in the photo was in the window of the Strand Bookstore at 12th and Broadway.
Posted by Bill Gunlocke, a city reader at 9:09 AM