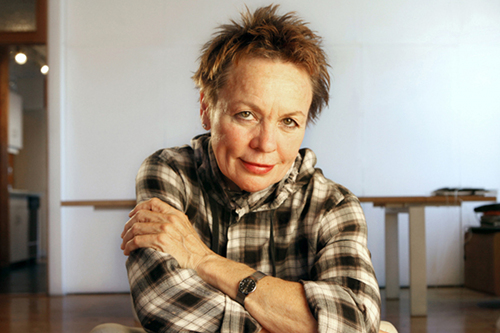 Friday is the best day.  Like it’s the best night even if I don’t go out to the half-dozen Irish bars in my neighborhood anymore.

Friday is a good day to hold my sign too.  More smiling faces. More well-wishing. Have a good weekend some say.

This morning on the tight two-lane street where I hold the sign, where cars come pretty close, a cab stopped right next to me. That happens sometimes. A parent on their way to work is dropping their little kid off at the pre-school on the block. Someone in a leg cast who works in the Dept. of Ed. building right there by where I stand is being let off, helped to the sidewalk by the driver. That’s who I thought would be getting out of the cab today.

But it wasn’t anybody dressed for everyday work. And it wasn’t a parent in a hurry with a four-year-old. It was Laurie Anderson in a rumpled white lab technician’s coat and thrift-store pants with beat-up low boots with her back to me getting out of the cab. I thought it could be her. It was her hair, sort of spiked, but softer than you’d think from all the great photos of her face you‘ve seen. Her face wasn’t as shiny as in the photos either. But it was a great face when she turned and saw the sign only four feet in front of her and smiled fully at me and held out her arms palms up with that face that said yeah of course why aren’t they taught to read that's sad that’s crazy. And then she scooted through cars to the other side of the street.

Posted by Bill Gunlocke, a city reader at 7:27 AM