from The New York Times: 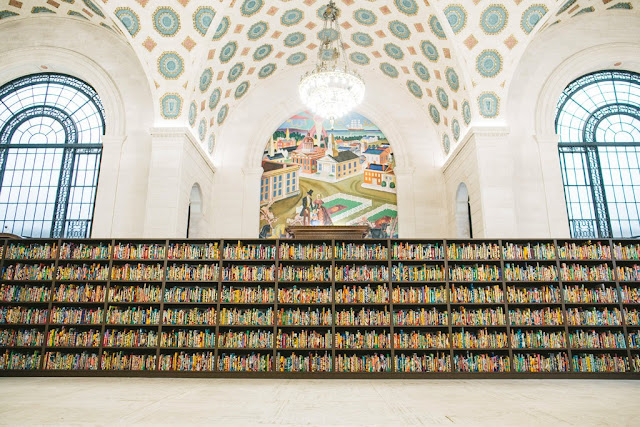 
Shonibare, a British-Nigerian artist, is widely recognized for his sculptures and installations that incorporate kaleidoscopic batik-print textiles — copies of traditional Indonesian fabrics produced by the Dutch and marketed in West Africa. He called the material “a metaphor for my own hyphenated identity.” For his installation “The American Library,” a 48-foot-long bookshelf cutting across the former reading room at the public library, the artist has used his signature textiles to wrap more than 6,000 books. Each is stamped in gold leaf on the spine with the name of a first-, second- or third-generation immigrant to the United States who has been culturally significant to American society, like Steve Jobs whose father came from Syria. “America was built on the contributions of immigrants,” said Mr. Shonibare, who has mixed in names of those opposed to immigration including Donald Trump, whose mother came from Scotland and whose paternal grandparents were German.

Posted by Bill Gunlocke, a city reader at 3:17 AM

Add comment
Load more...
Newer Post Older Post Home
Subscribe to: Post Comments (Atom)
'We go to college to be given one more chance to learn to read in case we haven't learned in high school. Once we have learned to read, the rest can be trusted to add itself unto us.'