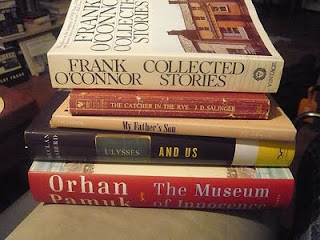 Nose In It:
Insomnia has me up in the middle of the night reading Frank O’Connor, Collected Stories. I’ve thought this before, so it’s not just a current enthusiasm: If I could take only one book, I’d take this one. Each story is its own little world, inside the already-little world of Ireland. His stories sent me to his memoir, My Father’s Son. An even littler world.

This re-reading of O’Connor may have been prompted by Ulysses and Us, a fresh new look at Joyce and 1904 Dublin. It was exciting to read, way more than I would have thought.

Orhan Pamuk’s novel is supposed to be next on my list. I don’t know though. Might be more romance than I can take. Loved Snow and Istanbul.

While not sleeping, I also read for the fifth or sixth time, The Catcher in the Rye. I first bought it off the small-town cigar store paperback rack when I was in grade school, thinking it was about baseball. (The popular cover then was an illustration of Holden with his red hunting cap on backwards.) Salinger created this wonderful voice, and you can see why young readers adopt Holden as a companion. He had a line that made me think about the recent election here: ‘In New York, boy, money really talks—I’m not kidding.’
Posted by Bill Gunlocke, a city reader at 8:05 PM