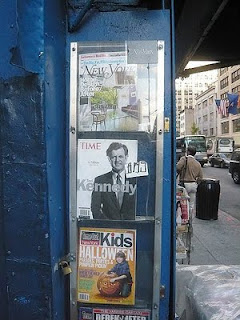 What’s next, knocking down McSorley’s for a Pinkberry?

The end of the classic newsstand is cause for lament (is it too late for outrage?)


You probably weren’t around for the razing of the old Penn Station (I was; I just wasn’t around here), but you’ve probably read about it. You’ve seen the pictures of the place, the way the light came in. You’ve wondered what they were thinking, to get rid of that great building and to replace it with what we have now.

What’s going on now with the newsstands is—to me—just as confusing, just as ludicrous. The great chocked-with-addictive-stuff, lumpy newsstands with their newspapers and cigarettes and candy bars and lotta-skin mags are being replaced with what looks like some things made by the people who made new phone booths when people made new phone booths. Silver steel and glass. Cold-looking. Texture-less. Airport-like.

This either matters to you, or it doesn’t. But to those who love street things and and love the old-pool-hall textures of those newsstands with their jumble of rectangles, all orderly in their way, it’s a loss equal to old Penn Station.

Photo caption: OLDSTANDS Not fastidious enough for the Mayor?
Posted by Bill Gunlocke, a city reader at 8:11 PM