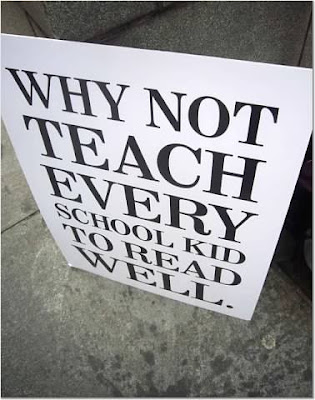 Still Looking For The Swami
It was something he said a long time ago.


Some mornings when I’m getting near my spot on Chambers Street in front of the Dept. of Education’s  old court-house building where I hold my sign that says, ‘WHY NOT TEACH EVERY SCHOOL KID TO READ WELL.’, I need to focus on why I’m doing this another day, why I’m gonna’ stand there with the sign for an hour like I’ve been standing there with it for an hour for almost 20 months. My mind finds the image it needs:  a sepia-tone montage of kids and adults, mostly black, who are filled with wide eyes  and a life force and are locked out from the life we lead because they can’t read well. That’s how I see the world then. The  image moves me forward. I’m centered inside, I have resolve, because the image works  for me again, as I’m  approaching  where I take the sign out of the big Kinko’s bag and go stand with it in my same spot.
I am where I’m supposed to be when I’m there. I’m made to be holding that sign.  Here’s something that I read in a magazine a week ago:

Take up one idea.
Make that one idea your
life---think of it, dream


of it, live on that idea. Let
the brain, muscles, nerves,

and every part of your


body be full of that idea,
and just leave every other


idea alone. This is the
way to success.


I don’t know who this Swami is. There used to be a guy who called himself ‘The Swami’. He was a regular caller to a sports talk show I listened to in Cleveland 30 years ago. He was funny. In a 50-year-old-loser way. Once he called the host, Pete Franklin, and said he’d written a song. When Pete, you could see him rolling his eyes on the radio at that moment, asked what the song was called, he said ,’If I Was, I’d Be Good’. I thought that was genius. I’ve thought of it a thousand times since then. I still listen to sports talk, hoping for another Swami.


When I taught school for six years to beat the draft right out of college in 1969, the best thing I may have done was to read The Lion, the Witch and The Wardrobe out loud to two or three classes of fifth and sixth graders one year. I’d never heard of the book before. I can remember standing in front of one class and choking up over something Aslan did. C.S Lewis passed away with very little notice. He died on the day John Kennedy was assassinated.
New York City cars honk often. They’re never honking for you. That’s a lonely fact of a big city’s  life. It’s so lonely you may not have even thought about it. But you never hear a horn honk and look up and it’s your aunt with her big face in the open window wondering if you need a ride. You never see anybody from high school drive by and wave. Almost every day when I’m standing there holding my sign a car will honk at me and I’ll nod my sign in their direction. They get the message of the sign. Maybe the sign is like Aslan to them.


That poem-like quote from the Swami, I found in a yoga magazine, which is an odd place, I admit, for a guy who’s trying to find another Swami on sports talk radio. But that’s where I found it. I’ve been doing yoga for about a year. We’re all trying to change our life. That’s why we read. That’s why we drink. That’s why we exercise. That’s why I went to yoga class one night down the street and allowed myself to get into it. Kids want to change their life too. If they could read well, they’d have way more chances. Grade schools have to teach them to read well. They have to give them all the time they need in school to read until they can do it easily. That’s why I brought up yoga. I’m only starting to get good at some poses after a lot of mornings of practice. There’s no substitute for repetitions, whether you’re an NFL quarterback trying to get comfortable taking snaps from your new center,  or a 65-year-old guy trying to master the tree pose.  Why don’t schools act like they know that when it comes to reading? Some mornings I don’t feel like getting up in the dark and un-rolling my purple yoga mat. Some mornings I just lie there under whatever covers haven’t fallen on the floor, and listen to talk radio for awhile.
Don’t tell anybody, but sometimes I think the Schools Chancellor might be a swami. He looks like 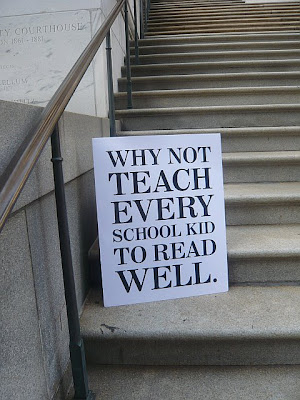 one to me whenever I see him come out of the big building to get into an official car to go off to some meeting.  He always says a warm good morning to me. And he says it with a knowing look on his spiritual face that says I know exactly why you’re holding your sign and I know exactly that I’m about to get into a car that’s taking me to another meeting where we aren’t going to be talking about teaching every school kid to read well.

If you listen to talk radio you get a cubist look at a subject. All the comments  will inform you in a way the lone host can’t. Just like all the comments in the online newspaper under  an opinion piece inform your more than the 800 words the columnist wrote.  Of course you have to take the good with the bad. But it adds up to something of worth if you have the patience for it. If you listen an hour every day. Like I listen with my sign for an hour every day. Hundreds of people walk by me. Some are regulars, like The Swami  was a regular, like The Vicious Piranha was a regular. Like Dave from Mayfield was. Many of the regulars smile at the sign every time they pass it.  Many say good morning.  Some give a thumbs up. Some make a comment. They’ll say ‘Absolutely’, or ‘I agree, 100%’. A few people will stare at the sign longer than you’d think they’d  need to to read it. They’ll look up to my eyes then and assertively nod in agreement.  I can tell some of these people that stare at it a long time can’t read well themselves. And they know the difference it’s made in their lives. ‘If I Was, I’d Be Good’ their wise, resigned faces say.

Posted by Bill Gunlocke, a city reader at 10:12 AM