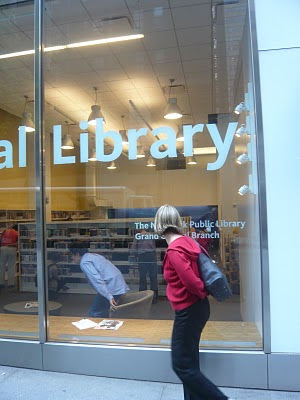 In these economic doldrums, Manhattan’s libraries are busier by double digits. But the city is cutting back their hours.

ARE THE CITY'S LIBRARIES TOO BIG TO FAIL?


Even in my sports-obsessed childhood and adolescence, I’d peel off from my buddies occasionally and go into the library by myself. This was small-town stuff in rural western New York. You knew the librarian, because you knew her husband who coached one of the teams in Little League. And your parents knew the librarian because they’d grown up with her. She wore glasses on a chain, and she was always nice to you — a kindred spirit you could tell, smiling with her over-bite … as she sat at her desk with books around her, stamping a customer’s card with one of those rubber date-stamps, before she slid the card snuggly into that tight back-page pouch and closed the book and handed it back, taking her glasses off her nose as she did.

I don’t know what I went in there for, really. Why did I leave my best friends to go in? Probably for nothing specific. It wasn’t for Gulliver or Daniel Boone — though it may have been for Davy Crockett, a huge obsession some time in grade school. Hardy Boys, maybe. Sports books, too. But I didn’t really need the white-framed Whipple Free Library for those. My parents were well-off and could buy me all kinds of books. I was mostly going in there to roam around. In the quiet. Among all those different-colored rectangles. To see what I might see. To find what might jump off the shelves at me.

The other night, the late architect and brilliant raconteur Philip Johnson was profiled on an obscure cable channel; they followed him walking around his grounds in New Canaan, going in and out of the half-dozen structures he’d designed on his 40 acres there. In one small building he walked into, there were books lining shelves on all the walls. Nothing else. No streamlined clocks or Rothko prints. He smiled with his bald head and big black glasses and said something about how books were the most beautiful things. They are, of course — everybody’s current iPad-gasping aside.

Libraries are filled with beauty. Bookstores, too. If you’re one of those people, like me, who sees it that way, you probably spend more time in museum bookshops than you do looking at the art on the gallery walls. You’d rather look at paintings and photographs in a big book by lamplight on your couch than slide along the exhibition walls, not knowing when to speed up or slow down, finding yourself going in the wrong direction too much of the time. You’re a book person, after all. Most comfortable with a rectangle in your hands, your eyes (heart?) all alive when you’re reading.

A book person, you may have gotten a letter last week from the New York Public Library that began like this:

Dear Friend, If you need proof that our City is hurting, step into your local library. With visits to our branches up to 18 million—an increase of 11 percent—in the past year alone, we have never been more in demand. …In the current economy, however, our financial resources are strained. Careful control of spending continues at the Library, allowing us to maintain a minimum of 6 day service and offer extended hours at many locations. But we’ve had to rely on a leaner staff and reduce our budget for the acquisition of new books and other materials by 25 percent in our branches and 35 percent in our research centers, all at a time when people need us most...

The letter goes on to ask you to become a Friend of the New York Public Library. The levels of suggested giving range from $25 to $1500. We should do it. Go to nypl.org and get the address. Maybe you can do it all online. Here’s why: About the same time the letter came, the NYPL email newsletter arrived, announcing that the city’s budget cuts were causing the library system to have to reduce hours at many of the branches. Still 6 days, but shorter hours. The Queens system has already announced cuts in their hours. Brooklyn hasn’t yet. My neighborhood branch will open two hours later three mornings a week and will close an hour earlier some other days.

I could complain about my branch. The noise of people ravenously riffling through DVDs. The library worker shelving books too loudly, the noise of it unnoticed by her because of the music-sizzling headphones in her ears. The sleeping homeless types and methadone addicts, dominating the periodical area, the day’s tabloids strewn in front of them. The cell phones ringing, answered in a loud manner. The lack of anyone seriously overseeing it all. The anger that wells up inside some days at all the distractions. The lack of comfortable seats.

But it is still beautiful to me, with its variety of books on shelves and in carts, waiting to be put back in place. And its wonderful, generous free-ness; you can actually take stacks of books home to look at. What a wonder. Let’s hear it for Ben Franklin. And let’s hear it for the mothers and the nannies who wheel in little kids to go upstairs where a spacious and wonderfully-stocked children’s department awaits, staffed by bright young women who never seem to run out of energy or patience. They must have dreamed that they’d one day be working in a vibrant library with little kids in New York City. Let’s hope they aren’t among the cuts.

A lot is asked of the libraries, especially in this big city where most of the patrons are strangers. And now they’re not going to be open as many hours as these people need them to be.

I increasingly lie awake in bed in the dark, shocked from sleep by some bump in the night. It’s a sign of age for sure and of a genetic endowment from a long-dead mother who felt the bumps too. And among the many things I think about, when I don’t just get up and start my day at 3:00 in the morning, is my recurrent plan, for this project — to every day get on the train and go to a different library in the city. Take my laptop and a marble-covered notebook and head out to other parts of Manhattan and the Bronx and Brooklyn and Queens and Staten Island, beyond the reach of most Barnes and Nobles — where libraries are centerpieces of the neighborhoods, where community fliers fill bulletin boards and countertops like they do in the back of old churches. Where immigrants learn to make their way in this new and confusing place. I don’t know why I haven’t undertaken that. Maybe it’s laziness. Maybe it’s all the competing stuff of little consequence that gets in the way. Maybe in the light of day the city still seems new and confusing to me. And so I stay close to home, deluding myself that the two blocks to the local library are my small-town Main Street and that when I go into my branch, the lady with glasses on a chain will be there smiling at me.

There was an item in the paper a couple of weeks ago that said kids, when they weren’t in school, were on the internet and on their phones texting and in front of the TV just about all the time. I don’t have the numbers in front of me, and I’m not moved to go on Google to find them, but it was an unbelievable amount of time spent with some gizmo or other. And I’m sure adults aren’t far behind. Things are changing fast. The iPad is the latest thing. I’ll admit I even felt stranded a month ago when I was in the center of town wondering where the closest Kinko’s might be, realizing that if I’d had an iPhone or a Blackberry, I could find one.

Books are endangered. Skyline Books on 18th Street just closed. Biography Books has lost its place on Bleecker Street. The aforementioned iPad and its relatives are primed to take over. Maybe it’s an age thing, but I mourn. Another bump in the night. I worry that kids won’t have the private book experiences we book lovers have had.

One hopeful sign, in the midst of all this flux, is the new library branch by Grand Central. It’s bright and has big windows like a new store, and there are good chairs to sit in and read, and there’s a Teen Center where kids can come and get good books and hang out. Here’s another idea I had in the dark. Maybe the city could open more new libraries like that around town. Places with a welcoming, modern feel. Maybe any new real estate development that looks for government funding or tax breaks could be required to put one of these facilities on the ground floor of their projects. The neighborhoods could use all the books they can get. Maybe the city could also give tax breaks to bookstores. This city has long been the center of book publishing. And those traditions should be cherished and saved and helped along, like Broadway shows, and Wall Street firms, and sports teams have been.

There has to be money for books. The kid that put down his bat and ball and went inside his hometown library and never really left says so.

Photo caption:
A RAY OF HOPE FOR BOOKS IN THE CITY. Maybe we could get more small libraries like the new Grand Central branch.
Posted by Bill Gunlocke, a city reader at 8:29 PM