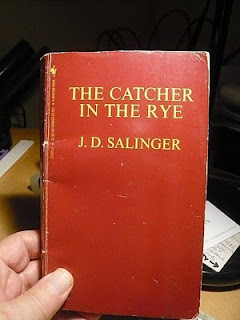 The Catcher has it all.

I tried this just now. I opened The Catcher in the Rye randomly to 10 different places and read the first sentence my eyes fell upon. Not one wasn’t interesting. It didn’t surprise me. If it surprises you, you haven’t read it in a while, or maybe you’ve never read it. There’s nothing like it. A female friend in Cleveland said she’s read it 20 times. When I was in 8th grade in 1961, my older sister had a boyfriend visit from Boston. He was quickly the older brother I’d never had, and always wanted. He was funny, drove a little sports car, kinda looked like Paul McCartney. He could hit a jump shot even with a camel hair coat on, in loafers, on our icy driveway. His parents were dead and he lived with an old New England sea captain. His name was Billy Young. One night on our porch, I saw him reading Catcher.

Photo caption:
Our Book: Likely the most significant book to my generation.
Posted by Bill Gunlocke, a city reader at 8:26 PM