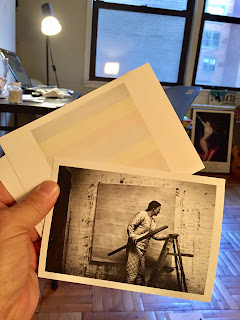 ON SUNDAY AT THE AGNES MARTIN EXHIBIT at the Guggenheim my middle daughter had a cynical post-election Hillary pin on and a long face--still. She's that way. A die-hard for Hillary. She wasn't even sure she'd be up for the museum, much as she wanted to see my sister in from out of town. Inside the Guggenheim I noticed her on her own looking closely at the art. She was deep into it, like she can be. I don't know what it said to her, but it certainly spoke to her. I could see that.
Today I met a friend in from Cleveland for breakfast near Lincoln Center. I happened to pass by a Trump building a few blocks from there. It was cordoned off. I always hated the look of his buidlings. I'm not just saying that now. It was good to get to Lincoln Center and all the impressive, artful buildngs there.
Art will save us now, if we let it. But we have to go to it.
Posted by Bill Gunlocke, a city reader at 12:37 PM