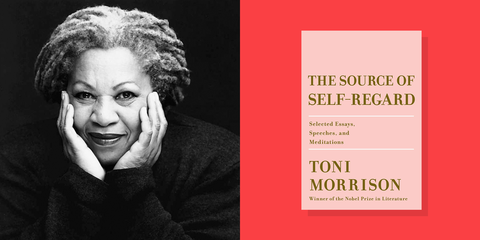 PENGUIN RANDOM HOUSE
I began thinking about Beloved in 1983. As it had been since the beginning of my writing years, I was drawn to it by my complicated relationship with history. A relationship that was wary, alert, but ready to be persuaded away from doubt. It was a caution based on my early years as a student, during which time I was keenly aware of erasures and absences and silences in the written history available to me — silences that I took for censure. History, it seemed, was about them. And if I or someone representative of myself ever were mentioned in fiction, it was usually something I wished I had skipped. Not just in the works of Harriet Beecher Stowe and Mark Twain’s unconscionable humiliation of a grown man at the hands of children; there was no respite in those years even in the encyclopedia or in history texts. While I maintain a cool eye while reading historical texts, it is an eye no cooler than the one historians maintain, and ought to maintain when reading fiction. Yet in spite of my wariness, my skepticism, there is a dependence, solid and continuous, that I have on history, partly for the data available to me there, but mostly for precisely those gaps, those erasures, that censure. It is in the interstices of recorded history that I frequently find the "nothing" or the "not enough" or the "indistinct" or "incomplete" or "discredited" or "buried" information important to me. For example, in 1963, my first novel, The Bluest Eye, was a consequence of being overcome by the wholesale dismissal of a certain part of the population (to which I belonged) in history texts and literature. Of all the characters chosen for artistic examination, with empathy or contempt, vulnerable young black girls were profoundly absent. When they did appear, they were jokes or instances of pity — pity without understanding. No one it seemed missed their presence center stage and no one it seemed took them seriously except me. Now, I didn't blame literature for that. Writers write what they like and what interests them. And even African American writers (mostly men, but not all) made clear that, except as background, prepubescent black girls were unable to hold their interest or stimulate their curiosity. Nevertheless, writers' lack of curiosity was not the point. To me the enforced or chosen silence, the way history was written, controlled and shaped the national discourse.

However much historical analysis has changed (and it has changed enormously) and broadened in the last forty years, the silences regarding certain populations (minorities) when finally articulated are still understood to be supplementary accounts of a marginal experience, a supplemental record, unassociated with the mainstream of history; an expanded footnote, as it were, that is interesting but hardly central to the nation’s past. Racial history, for example, remains very much parallel to main historical texts, but is seldom seen as either its warp or woof, and seldom threaded into the whole cloth. These ancillary and parallel texts are gaining wide readership while remaining the site of considerable controversy. (Debates about reading material swirled in many high schools.) Although the silences provoked virtually all of my work, inhabiting them with one’s own imagination is easy to note, not so easy to do. I have to find the hook, the image, the newspaper article that produces sustained musing, a "what if ?" or "what must it have been like?"
Beloved originated as a general question, and was launched by a newspaper clipping. The general question (remember, this was the early eighties) centered on how — other than equal rights, access, pay, etc. — does the women's movement define the freedom being sought? One principal area of fierce debate was control of one's own body — an argument that is as rife now as it was then. Many women were convinced that such rights extended to choosing to be a mother, suggesting that not being a mother was not a deficit and choosing motherlessness (for however long) could be added to a list of freedoms; that is, one could choose to live a life free of and from child- bearing and no negative or value judgment need apply.
Another aspect of the women's movement involved strong encouragement of women to support other women. Not to have one's relationship to another woman be subordinate to a relationship with a man. That is, the time spent with a female friend was not downtime. It was real time.
The completion of the debate was more complicated than that (there was much class conflict roiling in it) but those were the issues surfacing with gusto. I addressed the second one (women being important friends) in Sula. But the first one — freedom as ownership of the body, childlessness chosen as a mark of freedom, engaged me deeply. And here again the silences of historical accounts and the marginalizing of minority peoples in the debate claimed my attention and proved a rich being to explore. From the point of view of slave women, for example. Suppose having children, being called a mother, was the supreme act of freedom — not its opposite? Suppose instead of being required to have children (because of gender, slave status, and profit) one chose to be responsible for them; to claim them as one’s own; to be, in other words, not a breeder, but a parent. Under U.S. slavery such a claim was not only socially unacceptable, it was illegal, anarchic. It was also an expression of intolerable female independence. It was freedom. And if the claim extended to infanticide (for whatever reason — noble or crazed) it could and did become politically explosive.

These lines of thought came together when I recalled a newspaper article I had read around 1970, a description of an abolitionist cause célèbre focused on a slave woman named Margaret Garner who had indeed made such claims. The details of her life were riveting. But I selected and manipulated its parts to suit my own purposes. Still my reluctance to enter the period of slavery was disabling. The need to reexamine and imagine it was repellent. Plus, I believed nobody else would want to dig deeply into the interior lives of slaves, except to summon their nobility or victimhood, to be outraged or self-righteously gripped by pity. I was interested in neither. The act of writing is a kind of act of faith.
Sometimes what is there — what is already written — is perfect and imitation is absurd and intolerable. But a perfect thing is not every- thing. Another thing, another different thing is required. Sometimes what is already there is simply not enough; other times it is indistinct, incomplete, even in error or buried. Sometimes, of course, there is nothing. And for a novelist that is the real excitement. Not what there is, but what there is not.
A tall door rises up into this nothing; its hardware is heavy, secure. No bell invites your hand. So you stand there, perhaps, or move away and, later, sticking your hand in your pocket, you find a key that you know (or hope) fits the lock. Even before the tumblers fall back you know you will find what you hoped to find: a word or two that turns the "not enough" into more; the line or sentence that inserts itself into the nothing. With the right phrase, this sense becomes murky, becomes lit, differently lit. Through that door is a kind of freedom that can frighten governments, sustain others, and rid whole nations of confusion. More important, however, is that the writer who steps through that door with the language of his or her own intellect and imagination enters uncolonized territory, which she can claim as right- fully her own — for a while at least.
The shared effort to avoid imagining slave life as lived from their own point of view became the subtheme, the structure of the work. Forgetting the past was the engine, and the characters (except for one) are intent on forgetting. The one exception being the one hungry for a past, desperate for being not just remembered, but dealt with, confronted. That character would be the only one in a position to accurately render judgment of her own murder: the dead child. Beloved. Thus, after following a number of trails trying to determine the structure, I decided that the single most uncontroversial thing one can say about the institution of slavery vis-à-vis contemporary time, is that it haunts us all. That in so many ways all our lives are entangled with the past — its manipulations and, fearful of its grasp, ignoring or dismissing or distorting it to suit ourselves, but always unable to erase it. When finally I understood the nature of a haunting — how it is both what we yearn for and what we fear, I was able to see the traces of a ghostly presence, the residue of a repressed past in certain concrete but also allusive detail. Footprints particularly. That disappear and return only to disappear again. The endings of my novels have to be clear in my mind before I begin. So I was able to describe this haunting even before I knew everything that would lead up to it.

PENGUIN RANDOM HOUSE
Excerpted from: THE SOURCE OF SELF-REGARD: Selected Essays, Speeches, and Meditations by Toni Morrison. Copyright © 2019 by Toni Morrison
Published by arrangement with Knopf, an imprint of The Knopf Doubleday Publishing Group, a division of Penguin Random House LLC.
TONI MORRISON is the author of twelve novels, from The Bluest Eye (1970) to God Help the Child (2015). She has received the National Book Critics Circle Award and the Pulitzer Prize. In 1993 she was awarded the Nobel Prize in Literature. She lives in New York.
Posted by Bill Gunlocke, a city reader at 9:09 AM