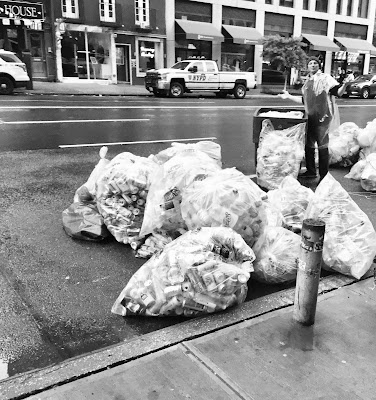 It’s Thursday. I was up early and deleted this photo I’d posted on Facebook last night. It’s of an aggressive guy with no mask who was out collecting empty cans in big clear plastic bags. He was out on the street just around the corner almost to the CVS. We bothered each other. I didn’t like his looks and he didn’t like that I was taking his photo. He calmed down sort of when I told him I was taken with the way the cans and bags looked. Though I wasn’t really. The older Asian women with lined faces who I usually see with those big bags I’m taken with. Somehow their dented and crushed cans look to be arranged in some order in their bags which is impossible but maybe they can do the impossible. There’s some ancient aesthetic about them. They don’t look like they can speak English. I’m almost sure they can’t. You wonder if they’re crazy a little bit. Or are they just poor? They have an unusual focus.

Posted by Bill Gunlocke, a city reader at 8:39 AM